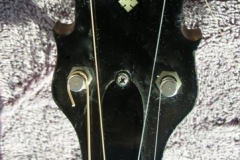 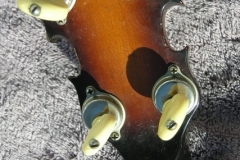 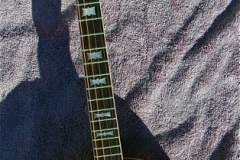 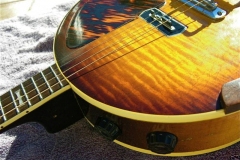 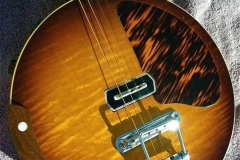 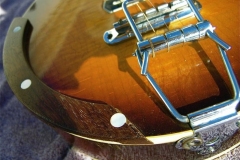 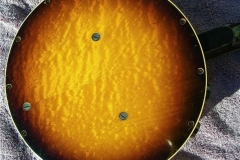 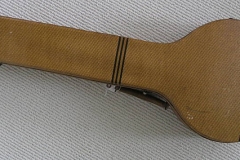 Gibson entered the electric instrument market in 1935 with a single model, the “EH” electric Hawaiian guitar; four years later, the company’s electric offerings took up nine pages of the catalog.  By 1939, Gibson was producing electric versions of not only Hawaiian and Spanish guitars, but also mandolins and banjos.  That year’s catalog declared that “the virile rhythmic tones of the banjo have always had universal appeal.  And now in the Gibson Electric Banjo we have developed a versatility of expression that adds a new mellow guitar-like tone to the customary snap and brilliance.  You can change instantly to a subtle softness that greatly enhances this instrument’s charm.”

In reality, Gibson’s electric banjo was a banjo in name only; with a nearly-solid maple body and a single “Charlie Christian” pickup in the bridge position, the instrument was more like a round-bodied electric guitar.  Traditional banjo design was echoed with a rosewood armrest inlaid with three mother-of-pearl dots, while a “firestripe” pickguard installed flush with the top was reminiscent of those used on Gibson’s flattop guitars of the period.  Side-mounted knobs controlled tone and volume and the tailpiece included an integral vibrato mechanism.

As with Gibson’s concurrent line of top-tension banjos, the tenor neck on this example has twenty frets rather than the conventional nineteen;  the inlay pattern is the slashed-bowtie design used on the top-tension style 7, but rather than the top-tension peghead shape normally seen on Gibson electric banjos, the peghead shape seen here is the modified fiddle-shape used on style 1 banjos of the period.  While many Gibson electric banjos were equipped with Kluson “stair-step” tuners with Catalin buttons, this example features Kluson “tin-can” tuners with ivoroid buttons.

The serial number #EGE-3899 is stamped on the back of the peghead; the first “E” signifies a production date of 1939, the “G” indicates a Gibson-brand (rather than budget-brand) instrument, and the last “E” designates an electric instrument (see Gibson banjo serial numbers vs. factory order numbers).  #EGE-3899 was shipped on July 13, 1939 to Phillips Music Company in a #516 “aeroplane cloth”-covered case along with an EH-150 amplifier.