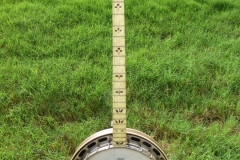 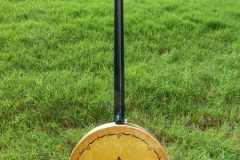 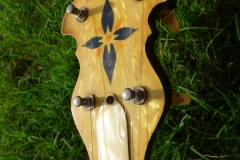 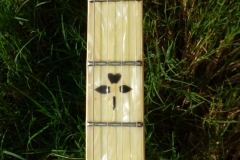 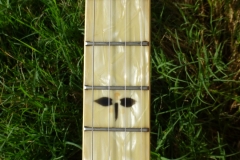 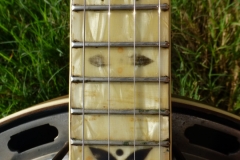 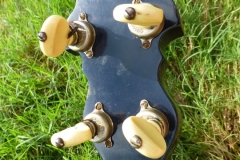 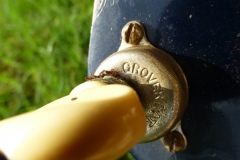 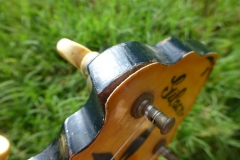 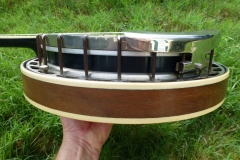 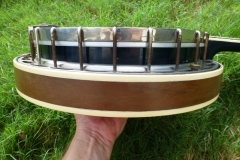 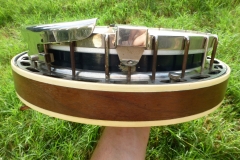 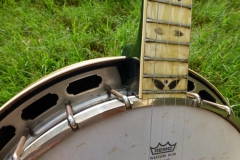 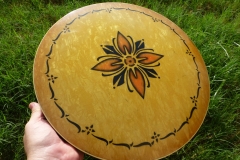 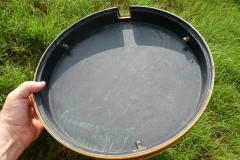 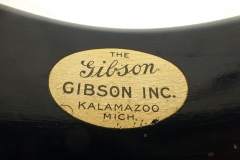 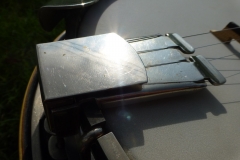 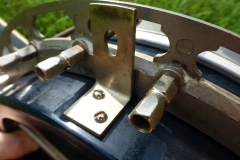 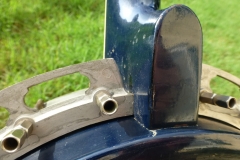 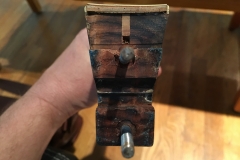 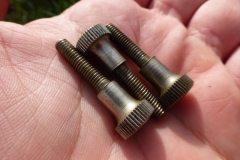 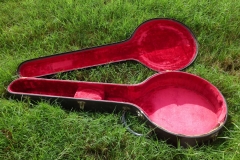 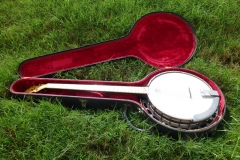 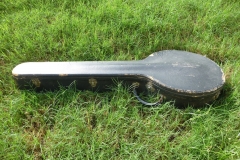 “This model is alive with flash and color and yet is not gaudy”, proclaimed Gibson’s Catalog X of 1936 in describing style 11.  Introduced in 1931, style 11 used pearloid, blue paint, and silkscreened designs to dress up what was one of the company’s less-expensive banjo offerings.  Selling for $50, half the price of the least expensive Mastertone model, the style 11 proved to be quite popular and remained in production through the early 1940s.  Besides lending “color” and “flash”, the pearloid and paint provided Gibson with a way to use cosmetically flawed wood which might not have been suitable for more expensive models.

The majority of style 11 banjos were tenor-necked; Gibson historian Joe Spann estimates to the total production of TB-11s at 700 units as opposed to only 80 plectrum versions as seen here. This PB-11 has no factory order number or serial number but would date to the early- to mid-1930s; it features the larger-diameter brass tone hoop which was replaced circa 1937 by the smaller-diameter hoop, and most Gibson banjos were marked with a factory order number or serial number on the back of the peghead beginning in 1938.

The tension hoop is a newer replacement; one hook and nut are prewar replacements. The original hooks show plating loss and oxidation. The blue paint from the sides of the resonator, revealing that this is a mahogany resonator as used on style 3 Mastertones of the same period. Judging by the appearance of the grain in the heel, the neck is walnut meaning it would originally have been intended for a PB-4 flathead. The original blue paint remains on the rest of the banjo. There is some lifting of the pearloid peghead veneer and one of the Grover two-tab tuners is losing its leather washer. The four-string Presto-type tailpiece on this one is a bit of a puzzle; it has no Grover markings and the cover has no decorative border. The original one-piece flange is in excellent condition. The case is a 1930s Geib and Schaefer #522 with plush lining, normally seen only with higher-end Gibson banjos.