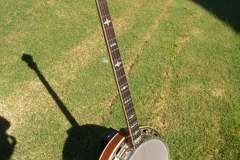 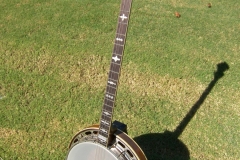 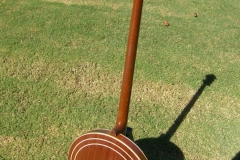 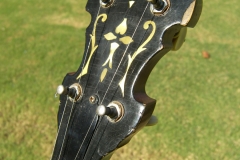 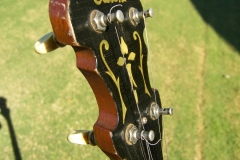 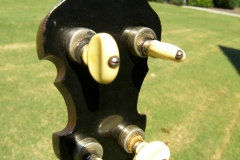 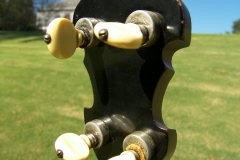 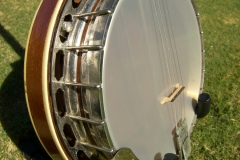 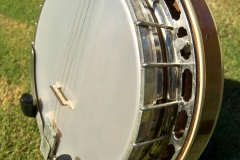 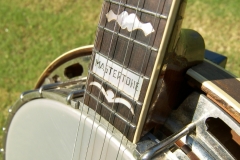 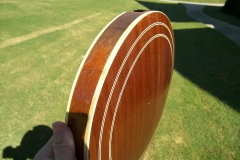 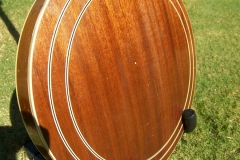 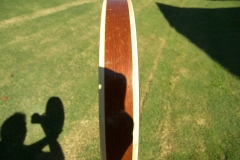 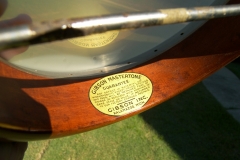 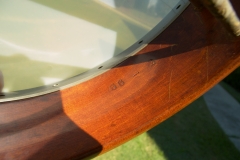 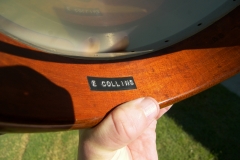 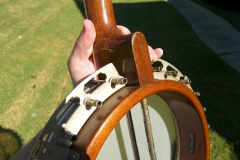 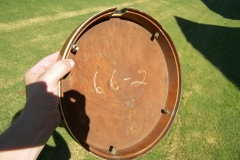 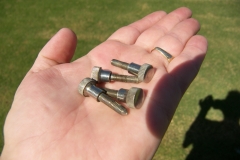 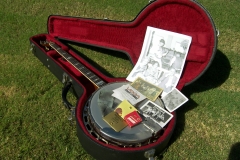 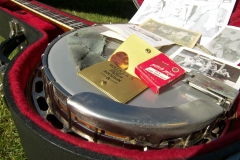 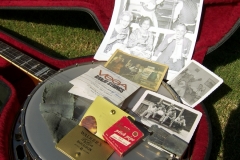 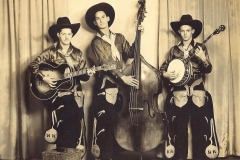 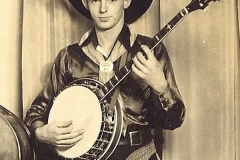 “Gibson has done more than put a longer neck on a Tenor Banjo,” proclaimed the company’s Catalog W of 1935.  “They have designed and built a Plectrum Banjo with special constructional features that distinguish Gibson Plectrum Banjos from all others–that twangy, brilliant harmony of the plectrum is amplified and enriched.”  Elsewhere in the same catalog Gibson advertised that “The special rim construction on Gibson plectrum and 5-string banjos assures players sweeter tone and greater volume.”

What all this somewhat vague catalog copy was referring to was the now-legendary flathead tone ring, which became standard equipment on five-string and plectrum Mastertones with the introduction of the one-piece-flange design in 1929.  #66-2 is a previously unlocated banjo conforming to standard specifications for a style 3 plectrum of the 1930s with twenty-hole flathead tone ring, one-piece flange, mahogany resonator with two concentric rings of white-black-white purfling on the back, and nickel plating.  The tailpiece is a Grover Presto and the tuners are Grover “pancakes.”

Mr. Collins is pictured above in a 1937 photograph of his western ensemble The Reno Racketeers.  A close look at this photo reveals that #66-2 originally had a fiddle-shaped peghead with leaves and bows inlays, a highly unusual combination also seen on PB-3 Mastertone #66-5, the only other instrument from this lot to have surfaced thus far.  The banjo’s current plectrum neck is mahogany with leaves and bows inlays, a double-cut peghead with a horizontal “Gibson” logo, and the serial number EA-5347, indicating a date of 1939, stamped on the back of the peghead.  The back of the peghead is also painted black, another highly unusual feature which appears to be factory original.

The most likely scenario is that the original neck of #66-2 was broken when the banjo was just a few years old, and a then-current replacement Gibson neck was installed.  Gibson’s shipping records from the period show numerous examples of banjos being returned to the factory for repair, as well as replacement components such as necks and resonators being shipped from the factory.  By the time of the presumed accident involving #66-2 the replacement neck would have been designated a style 75, style 3 having had its price lowered from $100 to $75 and its name changed to style 75 in 1937.  Although the fingerboard inlays on the new neck were identical to those on the original, the horizontal Gibson logo and serial number on the back of the peghead identify the neck as belonging to the style 75 era.  The black paint on the back of the peghead was possibly an attempt by Gibson’s repair department to make the mismatching serial number less obvious.  While no firm documentation related to the neck replacement has been found, an entry in Gibson’s shipping ledger for May 25, 1942 shows a PB-75 neck being sent to an unspecified location by railway express; PB-75s were produced in low enough numbers that it is fairly likely that this neck is the one installed on #66-2.

#66-2 remained untouched from 1988 until I was contacted about it by the family of Earl Collins in August 2009.  The photos above show the banjo in “as-found” condition; here are some views of the banjo taken apart for cleaning and the installation of a new head.

Please visit my Earl Collins page for more information on his life and musical career.

Here’s “Red River Valley” being played on #66-2 in its new incarnation as a five-string.