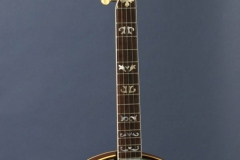 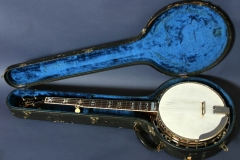 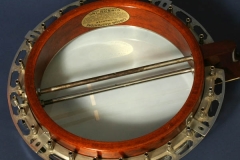 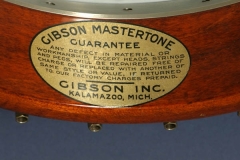 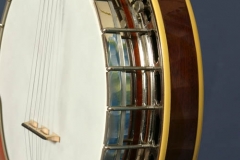 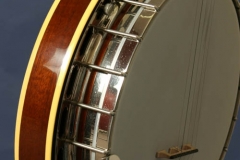 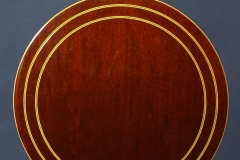 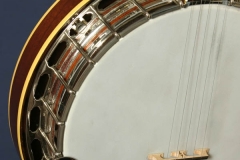 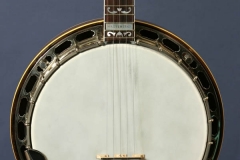 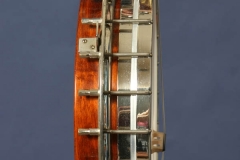 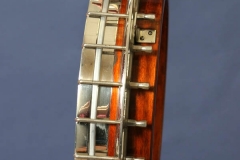 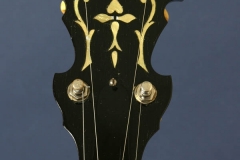 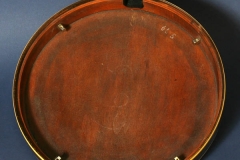 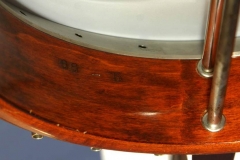 This banjo began life as a style 3 plectrum banjo with the highly sought-after one-piece flange and flathead tone ring.  It has been converted to five-string with the addition of a neck made by Robin Smith from a piece of Honduras mahogany over one hundred years old.  The conversion neck also features a prewar style 75 overlay and truss rod cover.  The original plectrum neck was inlaid in the “leaves and bows” pattern with a fiddle-shaped peghead rather than the double-cut type normally seen on this model.

The hardware is nickel-plated and the resonator veneer is mahogany with two concentric rings of white/black/white purfling on the back.  The tuners are the original 2:1 Grovers; the tailpiece is an original five-string prewar Presto.  The resonator was refinished at the Gibson factory.  Here’s more information on this great prewar flathead from former owner Charlie Cushman:

“I purchased this banjo in 1993 from the second owner who bought it in 1966 from the original owner.  Shipping records indicate the banjo was shipped from Kalamazoo on October 30, 1935 to a music store in San Francisco, California.  This banjo spent most of its days in California.  I attribute the banjo’s excellent condition partly to that fact.  I have carefully used this banjo on many recording sessions because of the rich tone and quality sound it produces.  A short list of sessions includes Tim O’Brien’s “Red on Blonde”, “Cornbread Nation”, and “Fiddler’s Green” albums, the Gaither Gospel/Bluegrass DVD, Hank Locklin’s “Generations in Song” album (with a skin head!), and many other albums.”