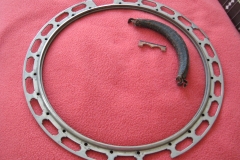 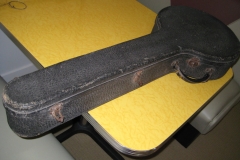 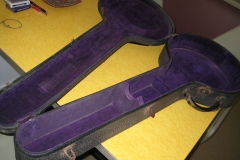 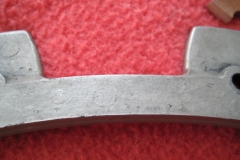 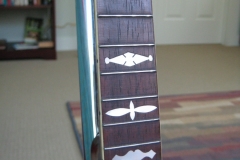 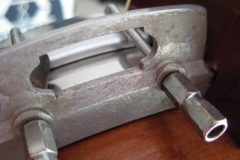 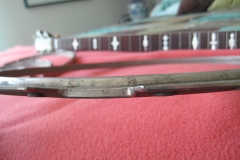 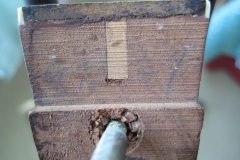 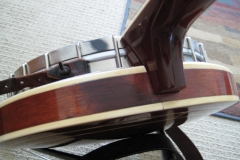 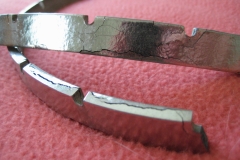 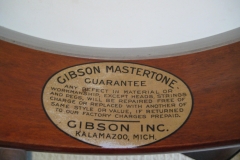 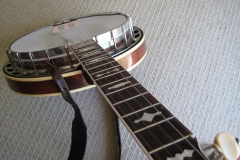 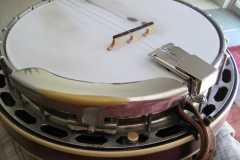 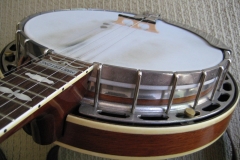 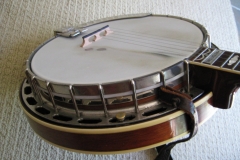 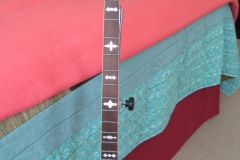 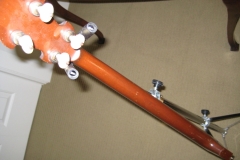 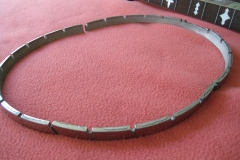 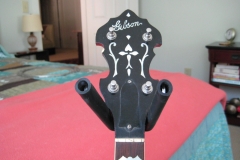 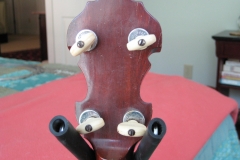 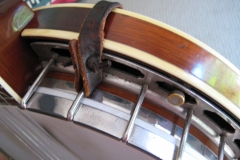 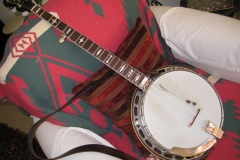 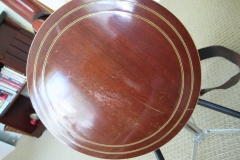 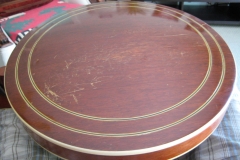 In the 1933 Gibson catalog, the illustration of the style 3 plectrum banjo is accompanied by the somewhat cryptic blurb “single bearing–flat type head–for twang and sweetness”.  What Gibson would make clearer in subsequent catalogs was that they had developed a tone ring which imparted greater depth and richness of tone to the plectrum (and five-string) banjo by allowing the entire surface of the head to vibrate freely, and this flathead tone ring would become standard equipment on most plectrum and five-string Mastertones for the rest of the prewar period while the forty-hole archtop ring continued to be most commonly seen on tenor models.

The use of the flathead tone ring on plectrum and five-string Mastertones had actually begun in 1929, when Gibson revamped their Mastertone line and switched from the two-piece brass flange to the one-piece cast flange, also changing the inlay patterns, peghead shape, and other specifications of their Mastertone models.  The PB-3 seen here is among the earliest Gibson Mastertones to feature both the one-piece flange and the flathead tone ring; while all prewar flatheads are rare, this one is especially so in that it is one of the very small number made, for unknown reasons, with no holes rather than the typical twenty holes.  The most well-known of these no-hole prewar flatheads is the famous “Banger”, a style 3 from this same lot used by J.D. Crowe on his early recordings with Jimmy Martin and later with his own bands the Kentucky Mountain Boys and The New South.

Here are more details from the lucky current owner:

“I acquired this banjo in 1975 from a southern Indiana music store. In ’74 the manager of the store told me he thought he knew where an old Gibson banjo might be and that he thought it was gold plated and had some carving on it. I told him I was in search of a “simpler” Mastertone–one that had a thinner rim, no carving and a single-piece flange. I was surprised when he called within the year and told me a banjo like I described had just “walked in the door”. I was a bit stunned when I saw it was a PB-3 flathead. It came “from under the bed” w/original case & Rogers skin head. I had its first five-string neck made and within a year the flange and tension hoop had deteriorated to the point where replacements were necessary. In 2006 I got a nice “fat-rim” flange from
TB-1 #9486-68 and tension hoop from lot 9971. It currently sports a mahogany neck from Frank Neat. She’s a wonderful old banjo and it’s been an honor to be her caretaker for over thirty years.”