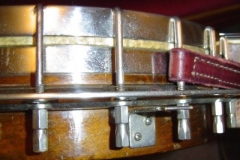 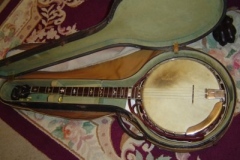 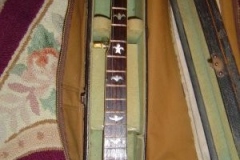 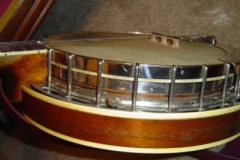 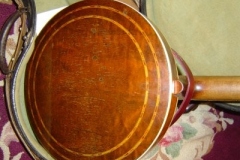 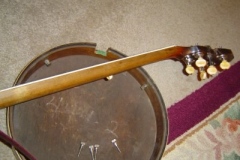 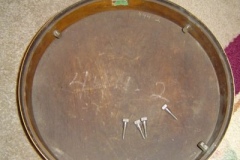 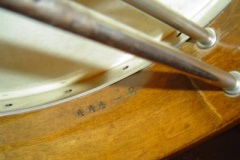 In 1937 Gibson overhauled its entire banjo line in response to declining sales; all existing Gibson Mastertone banjos were discontinued with the exception of style 3, which was lowered in price from $100 to $75 and renamed style 75.  The other Mastertones were replaced by the new top-tension models, described by Gibson as “the alarm clock that is going to wake up new possibilities in banjo playing”.

This banjo was shipped from the Gibson factory on March 7, 1939 and was incorrectly identified in the shipping ledgers as a PB-75.  In fact, the other known banjo from this lot, #444-1, was listed in the ledger as a PB-4.  The original neck of this banjo is no longer present, but it probably featured the hearts and flowers inlay pattern as seen on #444-1.  The pot is identical to that of #444-1, with a style 4 walnut resonator with concentric rings of multicolored wood purfling.  The hardware is nickel-plated as opposed to the chrome plating that had been standard on style 4.  The flange is one-piece and the tone ring is an original twenty-hole flathead.  For many years, this banjo has been set up with a prewar RB-1 maple neck; the fleur-de-lis inlays were rearranged to accommodate the Mastertone block from the original plectrum neck.  The peghead features an early set of cam tuners made by Lonnie Hoppers.  The original red-line hardshell case remains with the banjo.