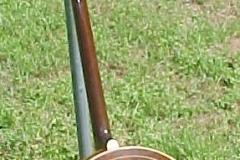 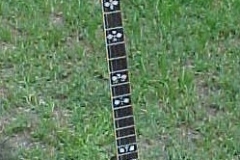 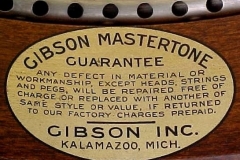 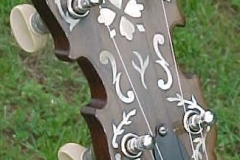 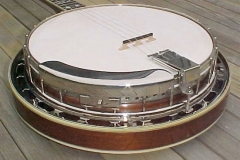 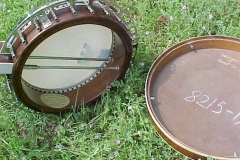 Gibson’s new Mastertone line of banjos debuted in 1925, the year before this PB-4 was made.  Style 4 was the second model up in the Mastertone line and in the first year of issue specifications included a ball-bearing tone ring, mahogany neck and resonator, two concentric rings of black and white purfling on the back of the resonator, two-piece flange, nickel plating, Presto tailpiece, fiddle-shaped peghead, hearts and flowers inlay, and Brazilian rosewood fingerboard.

Although this banjo bears a 1926 factory order number, it exhibits features typical of 1925 construction:  The ball-bearing tone ring has holes on the outside and the Mastertone logo appears on the peghead rather than the fingerboard.

The inside of the resonator bears the signature of Earnest Ray, the original owner of this banjo who played it professionally in the 1920s and 1930s.