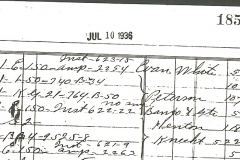 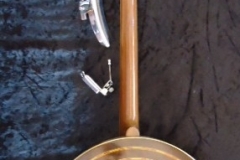 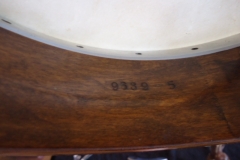 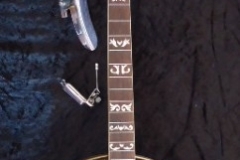 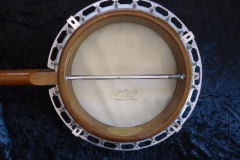 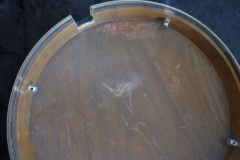 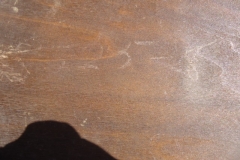 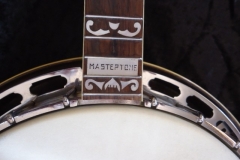 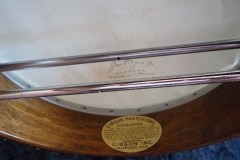 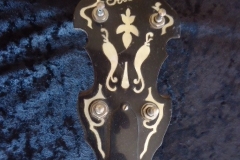 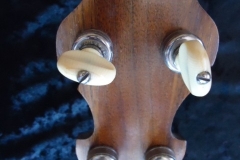 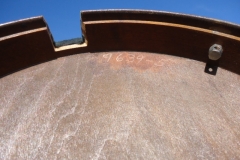 The style 4 inspired some enthusiastic prose from Gibson in its 1931 catalog:

“Rich, radiant beauty is the key-note of this instrument both in tone and appearance.  It is the materialization of the dreams of the most distinguished artist, yet it is not too costly. . . The finish is a beautiful, compelling, Burl Walnut–hand-rubbed to the point of sparkling iridescence.  All metal parts Chromium plated, the best wearing plate known to science”.

Lot #9639 was manufactured circa late 1930 (see Gibson banjo serial numbers vs. factory order numbers) and consisted of a mixture of tenor, plectrum and five-string style 4 Mastertone banjos, including the RB-4 played by three-finger pioneer Snuffy Jenkins as well as this beautiful plectrum banjo.  This example conforms to standard specifications for a plectrum-necked style 4 banjo of the period with walnut neck and resonator, two rings of multicolored marquetry on the back of the resonator, and chrome-plated hardware.  The flange is one-piece and the tone ring is an original high-profile flathead; the peghead is double-cut and the fingerboard and peghead overlay are inlaid in the “flying eagle” pattern.

This banjo presents something of a mystery for prewar Gibson banjo scholars in that another PB-4 Mastertone exists with the same factory order number stamped in the rim; the other PB-4 Mastertone #9639-5, formerly owned by Madison, Wisconsin resident Ralph Marquardt, features hearts and flowers inlays with a Mastertone block at the fifteenth fret.  The example shown here has two factory order numbers, #9525-8 and #9639-5, written inside the resonator.  #9525-8 is written in large chalk numbers in the resonator in the earlier 1930s orientation, parallel to the strings; #9639-5 is written in large chalk numbers in the manner typical of the later 1930s, perpendicular to the strings; it is difficult to tell which number was written first.  #9639-5 is also written entirely in chalk in smaller numbers by the neck notch in the resonator, with evidence of a previous enameled lot number having been sanded out.  Gibson factory records list the shipment of PB-4 Mastertone #9639-5 to Clark Music (location unknown) on April 10, 1935 and the shipment of PB-4 Mastertone #9525-8 to the Henton-Knecht Music Company of Philadephia, Pennsylvania on July 10, 1936; it is not known which shipping ledger entry refers to the banjo shown here.