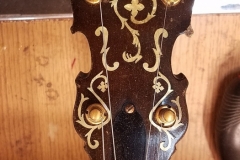 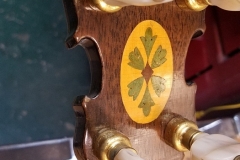 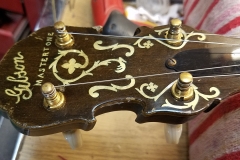 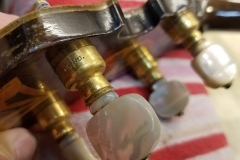 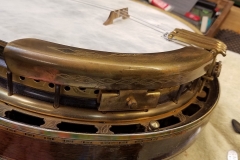 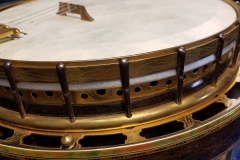 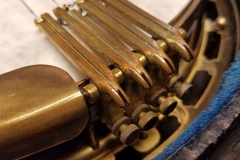 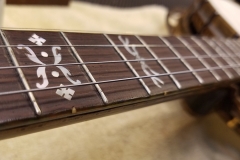 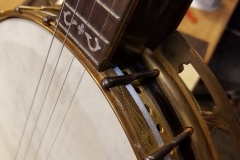 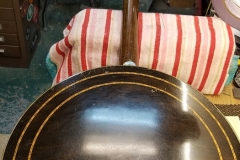 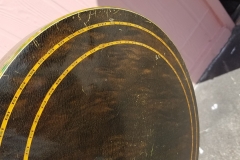 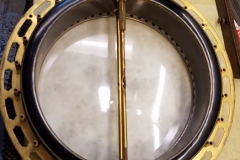 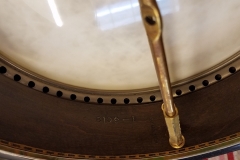 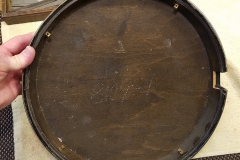 After going through a series of less-than-successful designs in the late teens and early twenties, Gibson finally made a strong entry into the banjo market with the introduction of its Mastertone banjo line in 1925.  The highest-priced banjo in the Gibson Mastertone line was the style 5, seen here in a rare plectrum configuration.  #8109-1 dates to 1925 (see Gibson banjo serial numbers vs. factory order numbers); the tone ring is the ball-bearing type used in the earliest Mastertone banjos; two features unique to 1925 are the holes in the outer skirt of the tone ring and the inlaying of “Mastertone” in small individual letters on the pehgead rather than in a mother-of-pearl block on the fingerboard.

This banjo conforms to standard specifications for the style 5 Mastertone banjo of the period with walnut neck and resonator, gold-plated and heavily engraved hardware, a two-piece “tube and plate” flange, multicolored wood purfling, multicolored wood inlay on the back of the peghead, iridescent “smoky pearl” binding, and mother-of-pearl inlays in the “wreath” pattern. It remains in excellent original condition with the exception of a replacement Oettinger “finger” tailpiece and replacement resonator thumb screws.