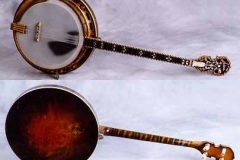 Style 6, one step up from the Granada, replaced style 5 as the fanciest numbered model in the Gibson Mastertone line.  Earlier examples such as this one featured checkerboard binding, while later style 6 banjos had eye-catching gold sparkle binding.  The resonator and plectrum neck are curly maple finished in an orange sunburst which Gibson named “Argentine grey”.  The flange is two-piece and the tone ring is a forty-hole archtop, although low-profile flathead rings have been seen on a number of style 6 banjos.  The fingerboard is ebony rather than the Brazilian rosewood found on the majority of prewar Gibson banjos, and the inlay pattern is a modified version of the familiar hearts and flowers.  The hardware is gold-plated with elaborate engraving which, on this instrument, includes the original owner’s name, Jimmy Smith, on the armrest.