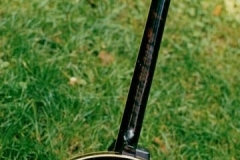 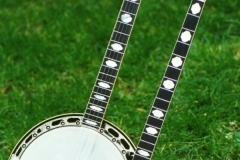 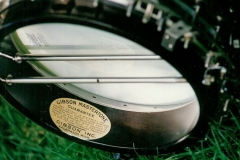 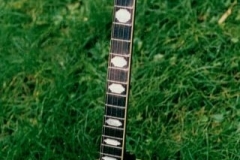 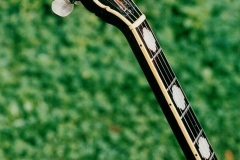 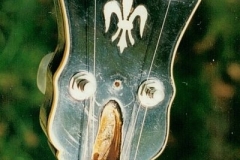 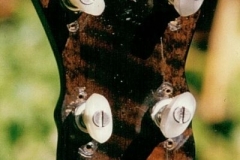 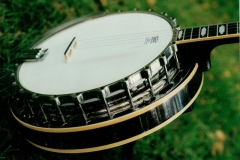 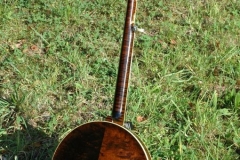 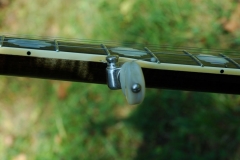 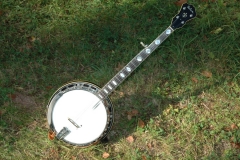 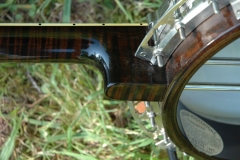 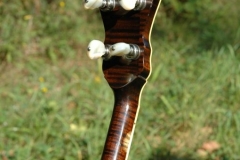 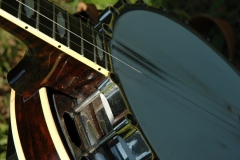 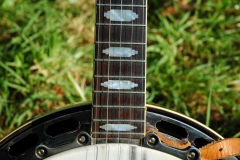 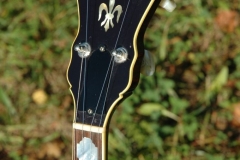 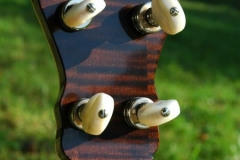 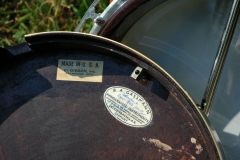 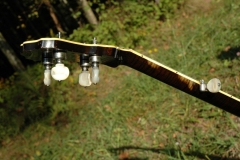 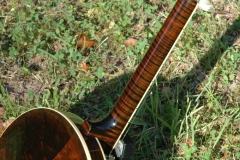 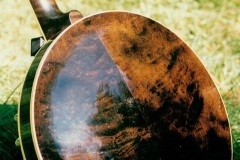 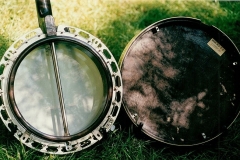 Gibson’s 1937 catalog introduced its new line of top-tension Mastertones, which the company hailed as “the alarm clock that is going to wake up new possibilities in banjo playing.”  The least-expensive top-tension model was style 7, seen here in a plectrum configuration.  The pot conforms largely to standard specifications for style 7 with a two-piece resonator back turned from solid straight-grain maple, a twenty-hole flathead tone ring, top-tension hardware, and nickel plating; the armrest is a later replacement.  The standard inlay pattern for style 7 Mastertones consisted of bowtie-shaped fingerboard inlays embellished with three slashes in each side, with corresponding peghead inlays, as seen on PB-7 Mastertone #912-1, the “G.I.H. Boshoff”.  The “stairstep block” fingerboard inlays seen here were typically used on style 12 and style 18 top-tensions; the fleur-de-lis peghead inlay was not a standard specification on any Mastertone model but is sometimes seen on top-tension models as well as style 75 Mastertones.  The inlay combination seen on #E3281-4 (see Gibson banjo serial numbers vs. factory order numbers) seems to have become more common beginning in the early 1940s and was actually pictured in one catalog illustration of the TB-7 in Gibson’s Catalog BB of 1942; it can also be seen on RB-7 Mastertone #5820-1, TB-18 Mastertone #E2753-1, and TB-18 Mastertone #E3794-3.

The “Made in U.S.A.” label inside the resonator identifies this as a banjo originally sent outside the United States; #E3281-4 was shipped from the Gibson factory to South African dealer H. Polliack and Co., Ltd., on May 16, 1941 along with its “littermate” #E3281-4.  Although the banjo’s later history is not documented, it is believed to have spent time in Rhodesia (present-day Zimbabwe) and the United Kingdom before finding its current home.  #E3281-6 is currently equipped with a reproduction five-string neck by German luthier Bernd Gassmann.

Photos by Bernd Gassmann; Courtesy of an anonymous collector.

Phots courtesy of an anonymous owner.