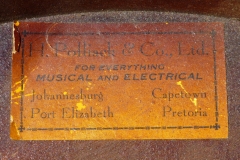 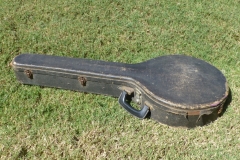 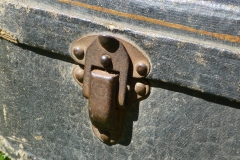 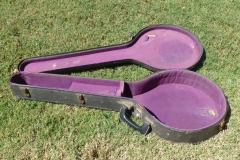 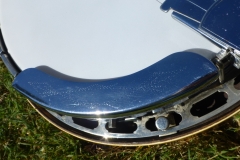 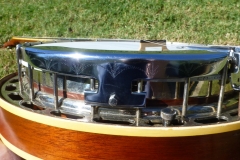 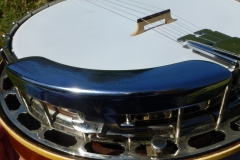 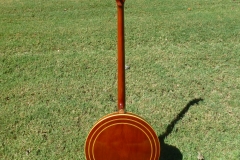 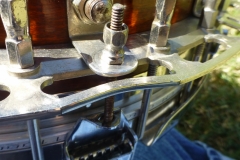 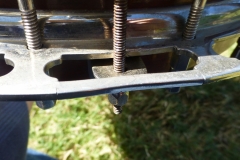 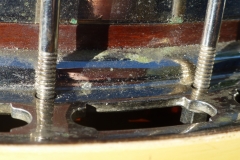 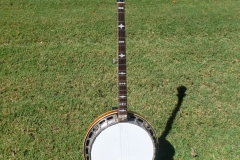 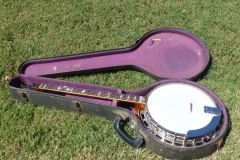 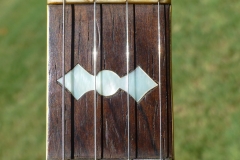 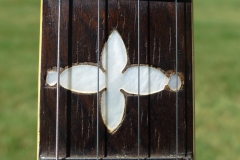 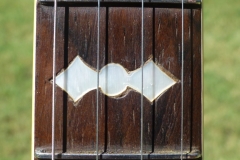 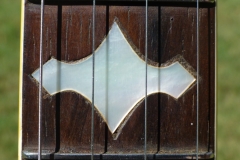 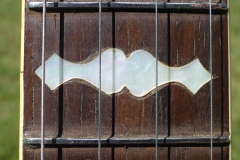 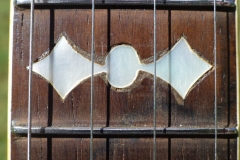 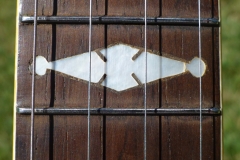 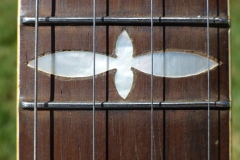 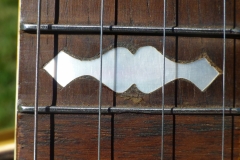 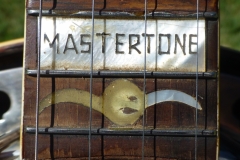 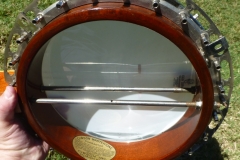 This plectrum-necked style 75 Mastertone was shipped on August 10, 1939 to H. Polliack and Co., Ltd., Gibson’s leading dealer in South Africa.  It features the “leaves and bows” inlay pattern which had been standard on style 3 banjos starting in 1929, although the horizontal Gibson logo places the neck in the style 75 era.  The small inlay piece normally seen above the logo appears to be absent on this example, but close examination reveals its faintly visible outline.  Gibson’s peghead overlays in the prewar period were first inlaid, then completely covered with black paint which was then scraped off the inlays; this technique was a quick way to obtain a clean look to the inlays by minimizing the visibility of the large amounts of filler used.  Occasionally a piece of inlay would be overlooked and left unscraped, as occurred here.

The serial number #EG-4061 (see Gibson banjo serial numbers vs. factory order numbers) is stamped on the back of the peghead as is typical for the period, along with the “Made in the U.S.A.” stamp which was routinely applied to instruments being shipped outside the United States.  The resonator, with its slightly wider resonator binding typical of style 75 beginning in the late 1930s, bears both a “Made in U.S.A.” sticker and a Polliack dealer’s label.  The numeric portion of the serial number is written in large chalk numbers inside the resonator, smaller pencil numbers below, and small chalk numbers by the neck notch.  There is no number stamped in the rim, as is typical for this period; the Mastertone decal is uncut.

#EG-4061 shows evidence of extensive use with a refinished neck and resonator, a slightly cracked flange, and multiple crudely repaired cracks to the plectrum neck, including a filled-in truss-rod cavity and a replacement curly maple heel cap.  A hole was also drilled in the side of the resonator, most likely for an electrical cord powering the lights which players in the calfskin-head era frequently installed inside the pot to help keep the head dry and tight; the wooden rim, flathead tone ring, and remainder of the pot remain completely unaltered.  The banjo retains its original Kluson tuners with amber Catalin buttons and its original flannel-lined #521 case by Geib, which has also been extensively repaired.  #EG-4061 remained in South Africa until the summer of 2014.