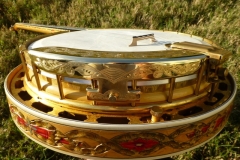 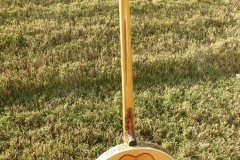 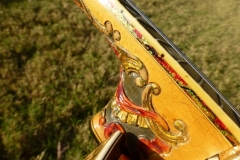 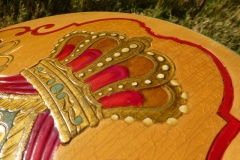 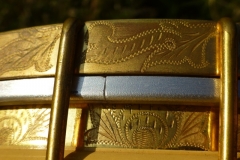 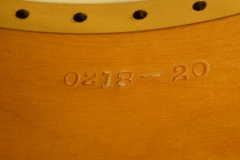 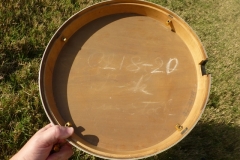 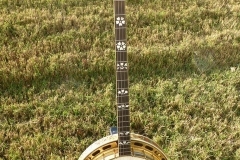 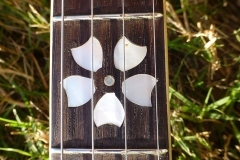 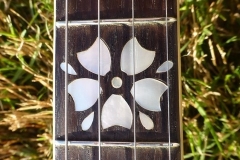 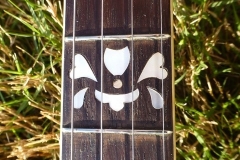 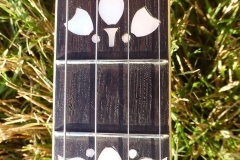 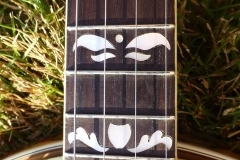 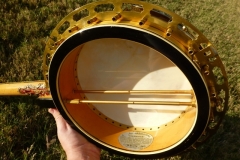 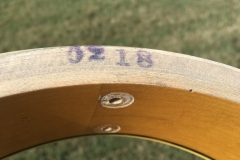 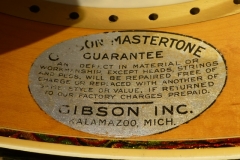 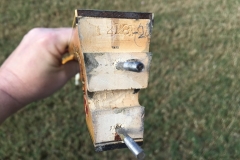 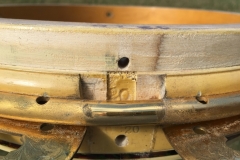 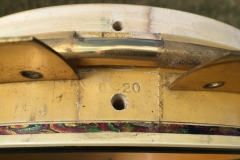 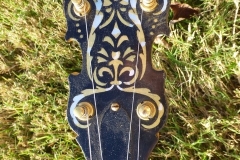 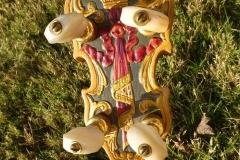 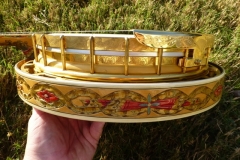 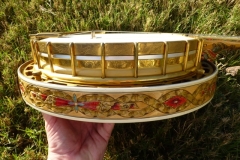 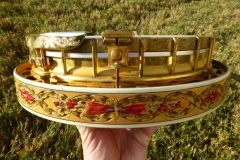 Gibson called the Florentine, introduced in early 1927, the “patrician leader among fine banjos” with “beauty that entrances the beholder”, “tone that inspires”, and “perfection that reveals itself with steadily increasing benefit to the player”.  While the majority of Florentines were tenors, #0218-20 (see Gibson banjo serial numbers vs. factory order numbers) is a rare plectrum model with the same scale length and tuning as a five-string or “regular banjo”, but without a short drone string.  Gibson promised that the plectrum banjo was “ideal for song accompaniment and feature playing–equally successful over the footlights, through the microphone, on the records or in the home.”

The Florentine was the most expensive banjo offered by Gibson until the introduction of the All American in 1935 and was available in a variety of woods and trim options; this example features the finish option which Gibson called “white holly” but which was actually maple painted in a cream color.  The fingerboard and rim are trimmed with multicolor sparkle “Christmas tree binding”.  There is elaborate engraving on the flange plate, tone ring skirt, “two-hump” Grover tailpiece, and tension hoop; the armrest is a newer replacement and is engraved in the Florentine pattern.  The tuners are the original “Planet” pegs with genuine mother-of-pearl buttons.  The resonator and neck feature fancy painted designs which Gibson described as “hand-carved” but which were, for the most part, pressed into the wood.

Typical Florentine specifications included a pearloid peghead overlay encrusted with rhinestones and a pearloid fingerboard embellished with hand-painted scenes of Venice, despite the model’s being named after Florence, Italy; however, various custom options are frequently seen on Florentines and this example features the mother-of-pearl inlaid peghead overlay and fingerboard of the Bella Voce model.

Factory order numbers with leading zeroes are seen on prewar Gibson banjos only for a brief period in 1927-1928, concurrent with the introduction of the Bella Voce and Florentine models; the presence of an ink-stamped lot number on top of the rim is unique to banjos from this factory order number sequence.  Close examination of the factory order numbers in the resonator reveals that the resonator was originally numbered #0218-21; chalk writing underneath the large factory order number appears to read “back in stock”.  Gibson’s original prewar shipping ledgers may shed some light on these irregularities; an entry from February 5, 1936 records the delivery of “PB-Special” #0218-21 to endorsing artist Harry Reser by salesman “Doc” Caldwell.  This banjo has not surfaced to date, but may well have featured a non-standard resonator, with the result that the resonator originally intended for #0218-21 was put “back in stock” and later used for #0218-20.

With the exception of the replaced armrest, this Florentine remains in completely original excellent condition.