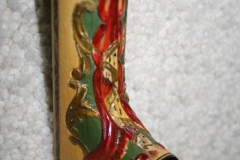 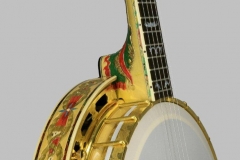 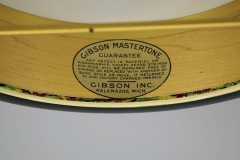 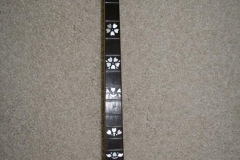 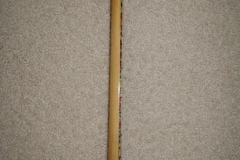 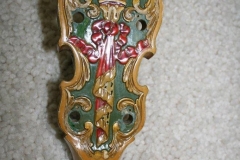 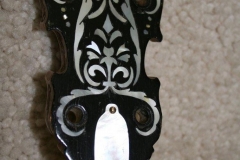 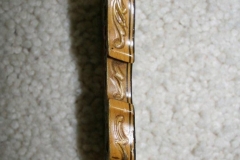 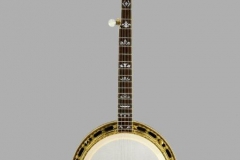 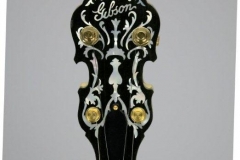 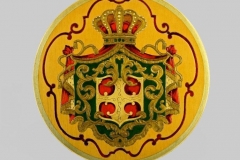 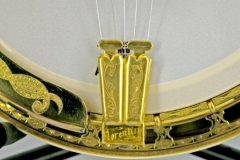 After its somewhat half-hearted entry into the banjo market in the late 1910s and early 1920s, by the late 1920s Gibson was taking on the competition in the effort to build ever-more-ornate tenor and plectrum banjos for the professional players and well-heeled amateurs of the day.  The Florentine was introduced in 1927 and, along with the Bella Voce, brought Jazz Age opulence to Gibson’s banjo line in the years just prior to the Great Depression.

Standard specifications for the Florentine included a pearloid peghead overlay inlaid with rhinestones as well as a pearloid fingerboard decorated with hand-painted scenes of (oddly) Venice.  Custom orders were more the norm than the exception for these banjos, however, and #8603-64 (see Gibson banjo serial numbers vs. factory order numbers) features the rosewood fingerboard and elaborate mother-of-pearl inlays of the Bella Voce model.  The neck heel, peghead back, and resonator are elaborately carved and painted, and all hardware is gold-plated and heavily engraved.  This example has the two-piece flange seen on most Florentines and the no-hole raised-head tone ring used for a brief period circa 1927.

Both the Florentine and the Bella Voce were available in a variety of woods; the light color seen here was specified in the catalog as “white holly” but in most cases was actually white-painted maple; #8603-64 is a rare example made of genuine white holly, as is the reproduction five-string neck by Randy Wood.