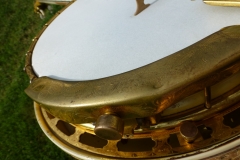 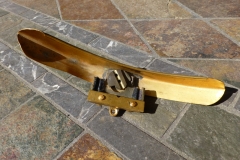 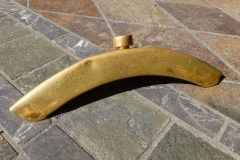 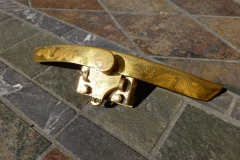 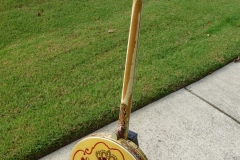 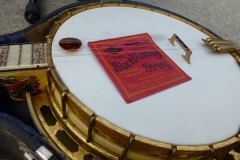 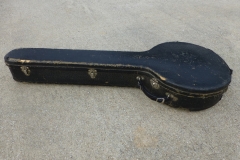 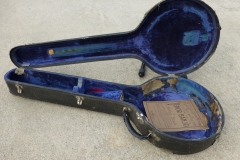 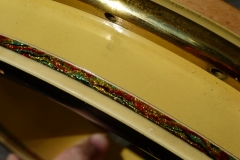 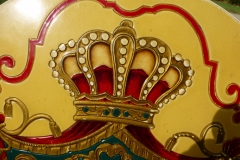 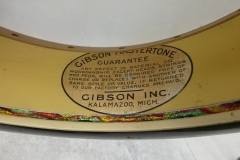 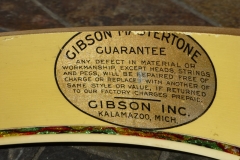 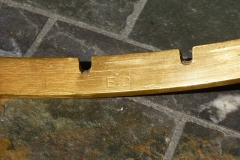 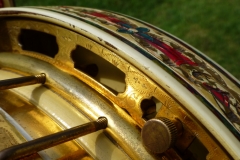 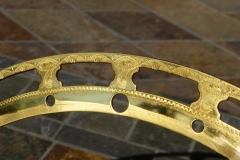 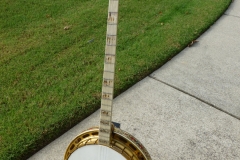 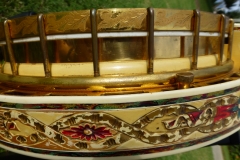 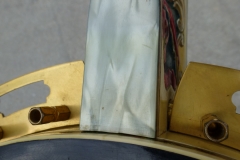 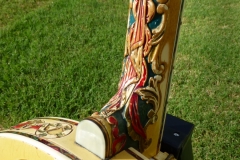 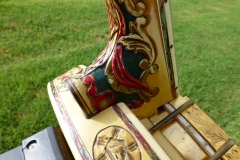 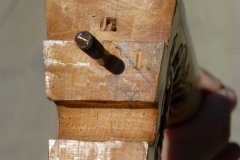 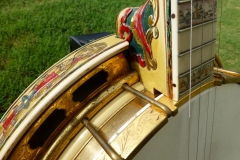 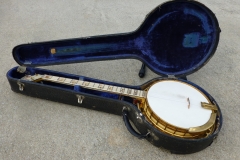 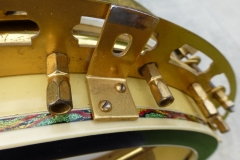 Despite a factory order number dating to 1928 (see Gibson banjo serial numbers vs. factory order numbers), this Florentine was apparently not assembled and shipped until some time between 1929 and 1935, by which time the flathead tone ring had become a standard specification on plectrum and five-string Mastertones.  It was not unusual for higher-end Gibson banjos to remain unsold for long periods of time, and plectrum banjos of all price levels tended to be slower sellers than the equivalent tenor models; when #9227-1 did leave the factory, it was equipped with a high-profile, three-pound, twenty-hole flathead tone ring with an unengraved skirt as used on the Granada.

Aside from its tone ring, #9227-1 is a standard example of a Florentine plectrum in the finish option which Gibson called “white holly” but which was actually white-painted maple.  The fingerboard, resonator, and rim are trimmed with multicolor sparkle “Christmas tree binding”.  There is elaborate engraving on the flange plate, “two-hump” Grover tailpiece, Grover “two-band” tuners (with real mother-of-pearl buttons), stretcher band, and armrest.  The armrest is the type which activates a mute, but the internal mute mechanism is no longer present.

#9227-1 remains in well-played but original condition, including its #522 Geib and Schaefer case.  This banjo was owned for many years by Robert Moses Cruz, a musician and radio entertainer born 30 April 1882 in Santa Rita, Monterey County, California.  His father was a native of Valparico, Chile.  During World War I he was working as a musician for Charles Landau in San Francisco; during 1919-1920 he was in China and in 1923 he traveled to Hawaii and Australia.  In 1930 he was living in San Francisco, in 1935 he was living in Stockton, California and in 1940 he was living in Oakland, California with his wife Henrietta Carolina Cruz.  They had two sons.  During World War II he lived in Berkeley, California and worked for the Quartermaster Department, Oakland Embarkation Depot.  He died 26 December 1967 in Novato, Marin County, California.  Mr. Cruz is seen above in a photo from his 1919 passport application.

Thanks to Joe Spann for his assistance with the genealogy of Mr. Cruz.