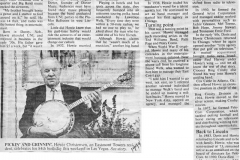 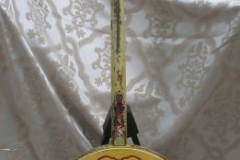 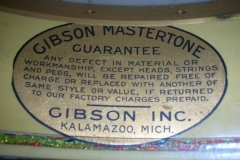 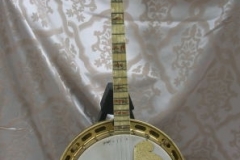 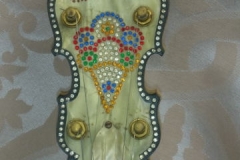 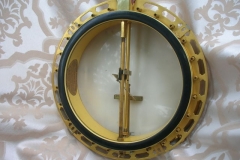 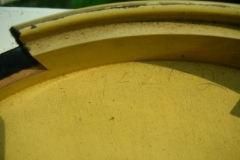 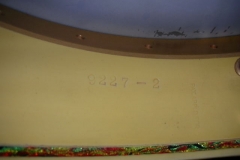 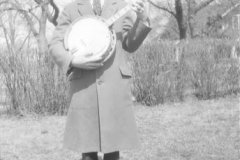 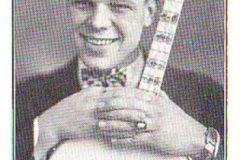 Despite a factory order number dating to 1928 (see Gibson banjo serial numbers vs. factory order numbers), this Florentine was apparently not assembled and sold until circa 1930, when it was reportedly bought at the factory in Kalamazoo by Howard Christensen of Lincoln, Nebraska (March 25, 1910–February 28, 2007).   By this time the flathead tone ring had become a standard specification on plectrum and five-string Mastertones, and Mr. Christensen’s Florentine left the factory equipped with a high-profile, full-weight flathead tone ring with engraved skirt.

#9227-2 is in other respects a standard example of a Florentine plectrum in the finish option which Gibson called “white holly” but which was actually white-painted maple.  The fingerboard, resonator, and rim are trimmed with multicolor sparkle “Christmas tree binding”.  There is elaborate engraving on the flange plate, “two-hump” Grover tailpiece, Grover “two-band” tuners (with real mother-of-pearl buttons), stretcher band, and armrest.  The armrest is the type which activates a “Vibrato Tone-Master” mute, which Gibson promised would provide the player “tonal control like an organ.”

Howard Christensen was pictured with #9227-2 in Gibson’s 1930 catalog; he formed his own band and enjoyed considerable success before teaming up with fellow bandleader Jimmy Joy in 1934 to form the band “Dance with Joy”.  Later years found Mr. Christensen working as a talent agent with acts including Tommy and Jimmy Dorsey, Patti Page, Perry Como, Jackie Gleason, and Bob Hope.