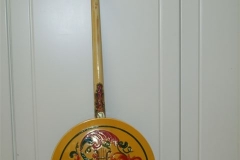 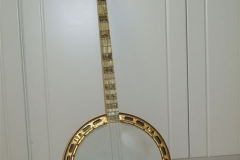 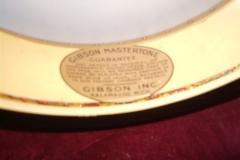 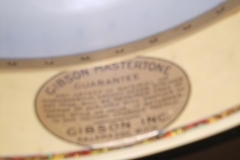 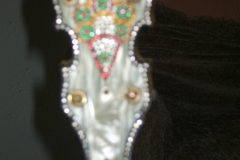 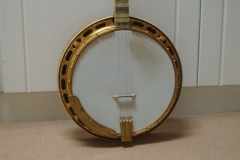 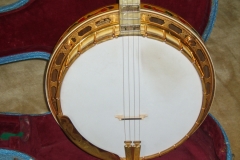 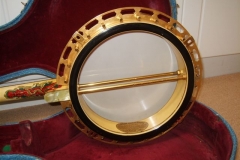 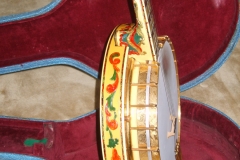 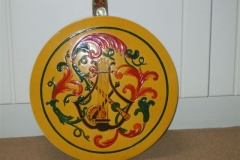 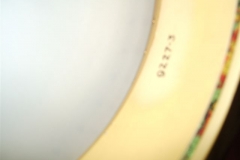 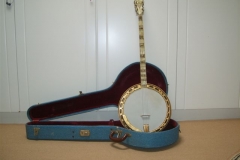 Despite a factory order number dating to the late 1920s, this Florentine was not shipped until October 17, 1939 when it was sent to Volkwein Brothers Music in Pittsburgh, Pennsylvania.  It was not unusual for higher-end Gibson banjos to remain unsold for long periods of time, and plectrum banjos of all price levels tended to be slower sellers than the equivalent tenor models.  Volkwein Brothers apparently returned the banjo unsold to Gibson, as it was shipped again on July 1, 1940 to “Barclay Bank” via international freight forwarding company Karr, Ellis and Company.  Although based in London, Barclays Bank operated throughout the British Commonwealth at the time, and this banjo surfaced in South Africa.  H. Polliack and Co., Ltd., was a major Gibson dealer in South Africa in the 1930s and a possible explanation for the shipment to Barclays is that Polliack may have gone bankrupt, resulting in the appointment of Barclays Bank as a receiver.

Aside from its intriguing shipping history, #9227-3 (see Gibson banjo serial numbers vs. factory order numbers) is a beautiful example of a flathead Florentine plectrum with a carved and painted resonator as typically seen on the Bella Voce model; the other deviation from standard Florentine specifications is the armrest, which is engraved in the pattern typically seen on style 6 Mastertones.  The tone ring is an extremely unusual high-profile flathead type with forty holes rather than the typical twenty; the neck, resonator, and rim feature what collectors have termed “Christmas tree” binding.  The “Made in U.S.A.” label inside the resonator was normally affixed by Gibson to instruments being shipped out of the country.

The original owner of #9227-3 was the noted South African player and teacher Charlie Macrow; the current owner was a student of Macrow’s and acquired the instrument in the late 1960s.  Other banjos from the same lot include PB-Florentine #9227-1, formerly owned by San Francisco-area musician Robert Cruz, and PB-Florentine #9227-2, the “Howard Christensen”.