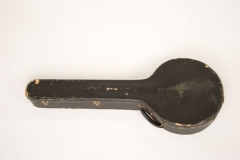 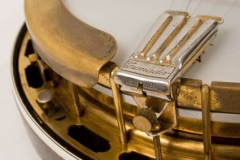 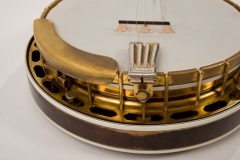 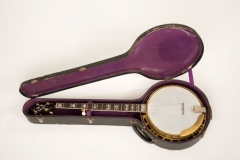 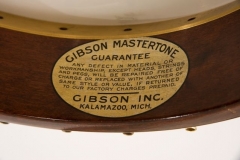 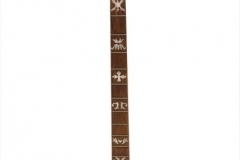 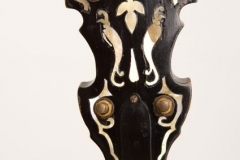 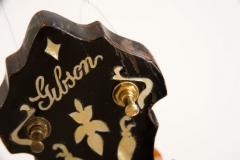 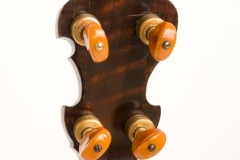 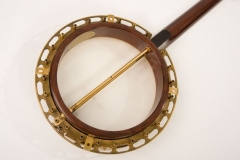 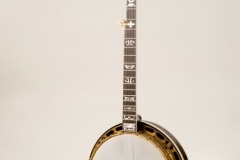 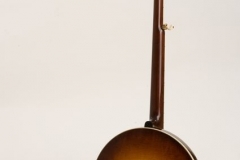 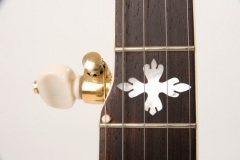 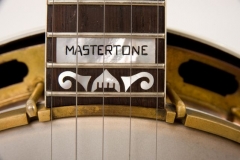 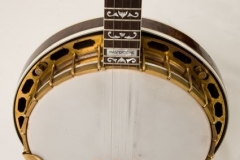 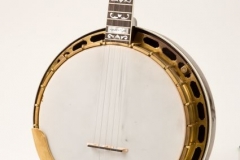 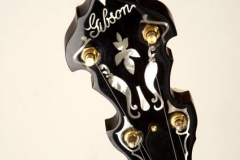 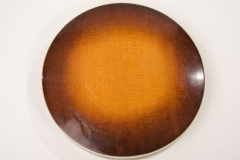 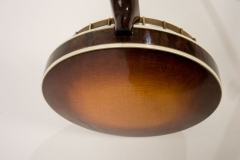 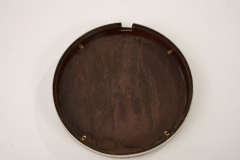 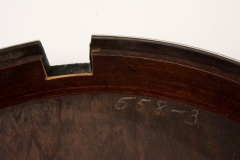 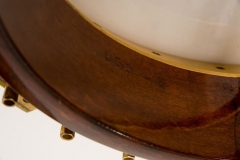 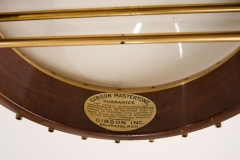 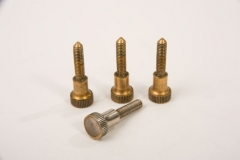 The Granada of the 1930s featured curly maple with a sunburst finish on the back of the resonator, gold-plated hardware with engraving on the tension hoop and armrest, a one-piece flange, and a double-cut peghead.  The majority of prewar Granadas were tenors and came with forty-hole archtop tone rings.  In 1929, however, Gibson started equipping some Mastertone banjos, typically plectrums and five-strings, with the new flathead tone ring which, according to Gibson catalogs of the period, provided greater “twang and sweetness” for plectrum and five-string tunings.

#558-3 (see Gibson banjo serial numbers vs. factory order numbers) is one such plectrum banjo and has an original high-profile twenty-hole flathead tone ring although, as is the case with quite a few original flatheads, the label is cut.  The Grover clamshell tailpiece is engraved “Granada” and the plectrum neck is inlaid in the flying eagle pattern.  The original tuners are deluxe Grovers with butterscotch-colored buttons.

Here’s the full lowdown from owner William B. Anderson:

“I purchased this banjo in August of 1999 from Calvin Minner and George Gruhn of Gruhn Guitars, Inc., of Nashville, Tennessee.

The banjo was converted immediately to a five-string by Gibson.  Being relatively unhappy with that neck, I eventually replaced it with several necks by Frank Neat of 84 Womack Street in Russell Springs, Kentucky–a mahogany flying eagle, a curly maple flying eagle, and a curly maple hearts and flowers.  Yes, I have the original plectrum neck and three five-string necks.

This banjo was previously owned by Douglas Ewald of Minnetonka, Minnesota.  He had purchased the 1936 PB-Granada flathead from a Providence, Rhode Island pawn shop in 1961 for the price of $39.

The banjo came complete with its original plectrum neck, skin head, and bracket wrench but in a new hard shell case.  I was given a period case from my generous friend John Bernunzio to complete the package.

This is a fantastic playing banjo; I am very fortunate to own this flathead Granada.  I have played it all around the Arkansas region.  It has shared stages with the Osborne Brothers, J.D. Crowe and the New South, Robert Bowlin, Jim and Jesse, Larry Sparks and the Lonesome Ramblers, Ronnie Reno, Tim Crouch, Mike Snider, the Tennessee Gentlemen, Bobby Hicks, Doc Watson, Keb’ Mo’, Scott Vestal, Sam Bush, Marty Stuart and his Fabulous Superlatives, Mare Winningham, the Nashville Bluegrass Band, the Cox Family, etc.”