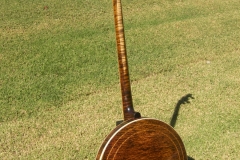 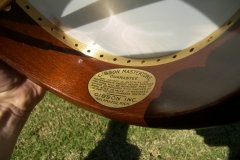 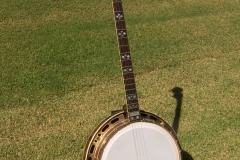 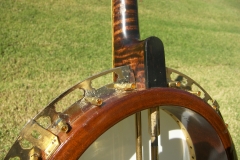 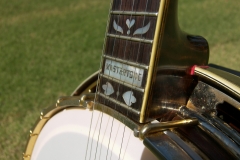 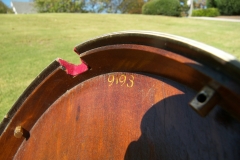 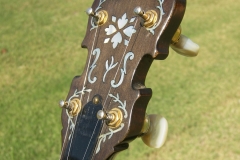 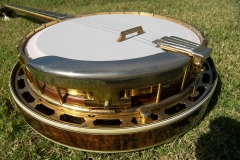 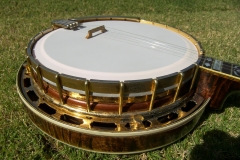 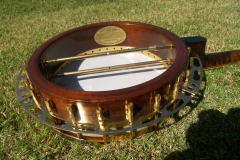 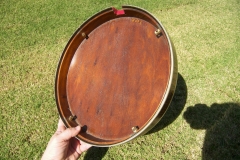 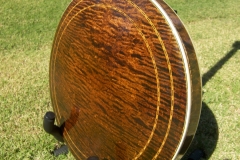 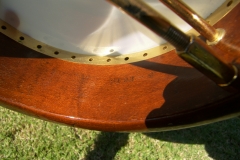 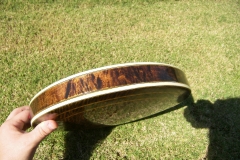 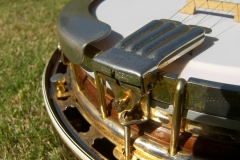 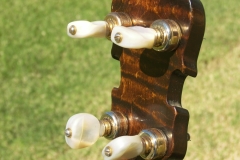 #9193-9 (see Gibson banjo serial numbers vs. factory order numbers) dates to 1928 and conforms to typical specifications for the Granada of the period, although it appears in Gibson’s shipping ledgers as being shipped on August 8, 1935 to D.S. Andrus and Co., a music store in Williamsport, Pennsylvnia.  The banjo was listed in the ledgers as “1 old PB-G”, since by 1935 the Granada had long since changed to a one-piece flange design with a double-cut peghead and, in the case of most plectrum and five-string examples, a flathead tone ring.   It was not uncommon for higher-grade instruments such as the Granada, particularly in less-popular neck configurations such as plectrum, to either remain unsold at the factory for long periods of time or to be returned to the factory by a dealer in exchange for a more sellable instrument.

This example features a brass, rather than pot-metal, stretcher band stamped “E2” on the inside.  At some point the banjo was subjected to buffing, removal of the original gold plating, and replating in a manner inferior to that used in the 1920s and 1930s.  The armrest engraving is still discernible, but was partially obliterating by the buffing operation.  Some of the original brass hooks cracked and so all twenty-four hooks and nuts were replaced with new ones, this time with the hooks made of more durable steel rather than brass.  The banjo retains its original “two-band” Grover tuners with solid mother-of-pearl buttons.

#9193-3 has also had some buffing done to the finish and the inside of the resonator has been lacquered over, leaving only the red enamel batch number visible near the neck notch.  The original finish inside the rim does not appear to have been altered, leaving the Mastertone decal undisturbed.  The banjo has been refretted and shows playing wear to the back of the neck, which exhibits particularly dramatic figure in its curly maple.