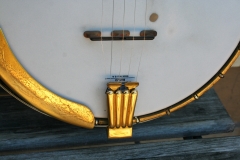 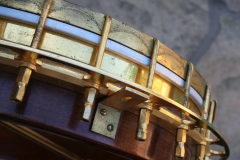 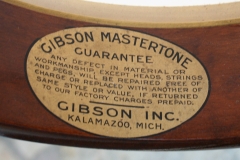 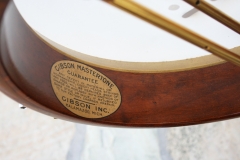 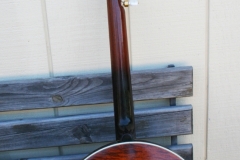 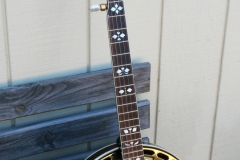 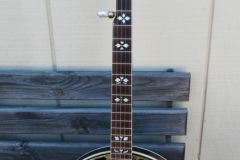 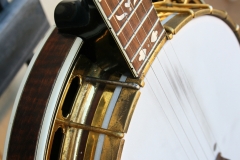 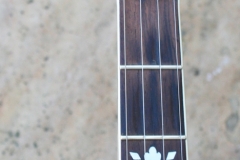 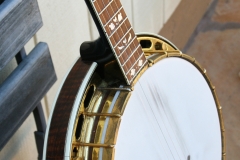 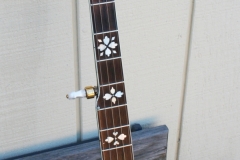 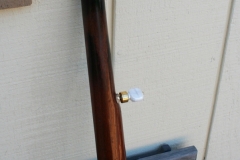 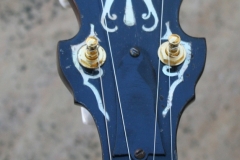 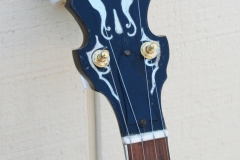 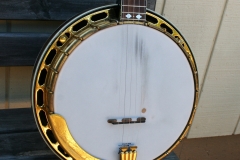 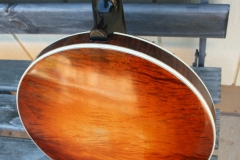 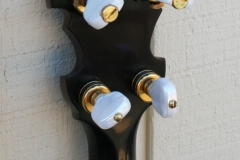 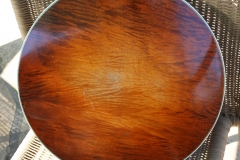 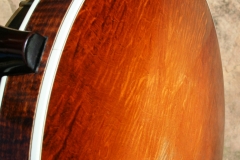 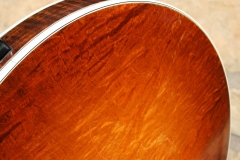 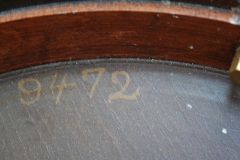 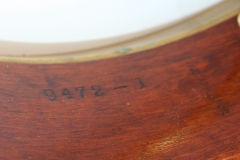 Gibson’s 1930 catalog called the Granada plectrum “a gold banjo of proven success.”  The majority of 1930s Granadas were tenors and came with forty-hole archtop tone rings; in 1929, however, Gibson started equipping some Mastertone banjos, typically plectrums and five-strings, with the new flathead tone ring which, according to Gibson catalogs of the period, provided greater “twang and sweetness” for plectrum and five-string scale length and tuning.  #9472-1 dates to 1929 (see Gibson banjo serial numbers vs. factory order numbers) and belongs to the first known lot of one-piece-flange Granada plectrums with flathead tone rings; the tone ring is the rare no-hole version seen primarily in some of Gibson’s earliest flathead Mastertones.  Although the original flange is no longer intact (a common problem with the earliest one-piece flanges manufactured for Gibson by the Doehler Die Casting Company), the rest of the hardware is in excellent original condition.

#9472-1 was shipped from the factory with a plectrum neck with flying eagle inlays; it is now set up with a mahogany original five-string neck from a 1930s Gibson-made Kalamazoo-brand banjo featuring an extremely rare original triple-bound fingerboard with the hearts and flowers inlay pattern in place of the Kalamazoo‘s typical dot inlays in an unbound board.  Luthier Christopher Berkov has recently installed a prewar double-cut peghead veneer with flying eagle inlays, which, together with the hearts and flowers fingerboard and lack of a Mastertone block, recreates the look of RB-Granada Mastertone #9530-5 which was played for decades by pioneering old-time banjoist Wade Mainer.  The banjo is currently equipped with an original flange from a 1930s Kel Kroydon tenor which has been gold plated.