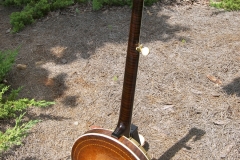 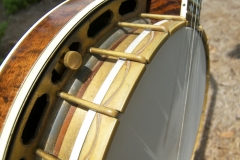 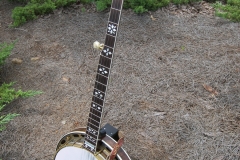 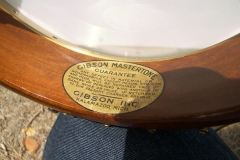 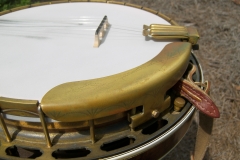 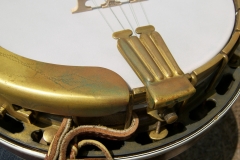 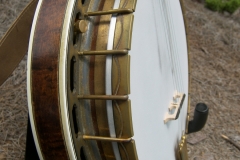 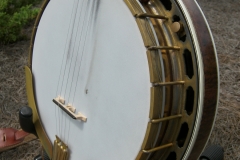 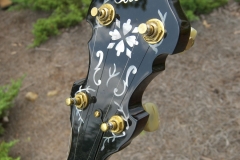 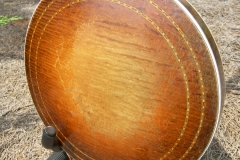 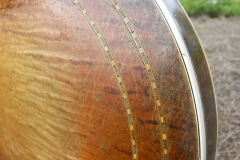 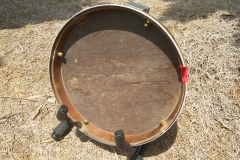 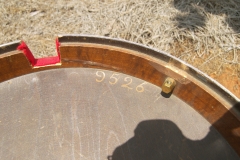 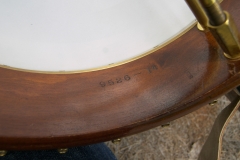 An early 1930s Gibson catalog had this to say about the Granada:

“Thrilling beauty of tone and finish is yours in this handsome “DeLuxe” model.  An instrument that will “stand out”–commanding attention in any company. . . Triple gold plated metal, engraved parts, and designs are hand burnished with a satiny background; curly maple neck, resonator, and rim–selected from the finest that grows; Rosewood fingerboard inlaid with attractive designs in white pearl, bound with white and black ivoroid with marqueterie strippings”.

The majority of 1930s Granadas were tenors and came with forty-hole archtop tone rings.  Circa 1929, however, Gibson started equipping some Mastertone banjos, typically plectrums and five-strings, with the new flathead tone ring which, according to Gibson catalogs of the period, provided greater “twang and sweetness” for plectrum and five-string tunings.  #9526-14 (see Gibson banjo serial numbers vs. factory order numbers) is one such banjo and has an original high-profile twenty-hole flathead tone ring with an uncut Mastertone label.  This instrument remains in an exceptional state of preservation including its original flange, which is often deteriorated on 1930s Granadas due to interaction of the gold plating with the pot metal components.  The original tension hoop apparently deteriorated and was replaced in the 1970s.  While the original neck no longer remains with this banjo, lot #9526 is known to have consisted of plectrum Granadas with the exception of one five-string.  The concentric rings of marquetry on the back of the resonator are a feature typically associated with the two-piece-flange Granadas of the 1920s, but they are found on some of the earlier one-piece-flange examples from the 1930s.

This banjo is currently set up with a five-string neck by Frank Neat of Russell Springs, Kentucky.