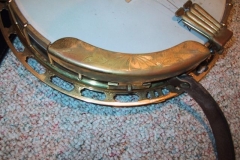 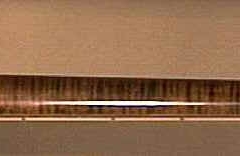 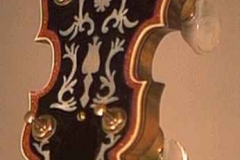 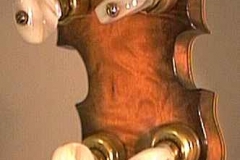 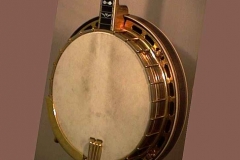 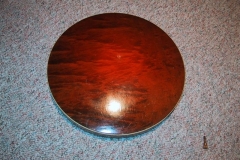 Style 6, one step up from the Granada, was introduced in late 1927 and replaced style 5 as the fanciest numbered model in the Gibson Mastertone line.  The PT-6, so called because of its scale length in between that of a tenor and a plectrum, was introduced in early 1929 and was the first style 6 banjo to feature gold-sparkle binding.   This eye-catching ornamentation later became standard on all style 6 banjos, replacing the earlier checkerboard binding.  The resonator and neck are curly maple finished in an orange sunburst which Gibson named “Argentine grey”.  The flange is two-piece and the tone ring is a high-profile flathead; the hardware is gold-plated with elaborate engraving.  The fingerboard is ebony rather than the Brazilian rosewood used on most prewar Gibson Mastertone banjos, and the inlay pattern is a variation of the familiar hearts and flowers.  The fiddle-shaped peghead is equipped with Grover tuners with mother of pearl buttons.