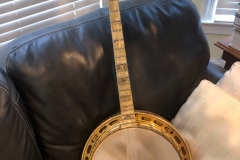 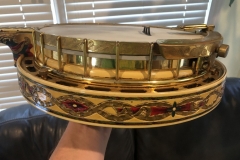 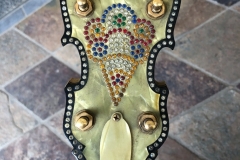 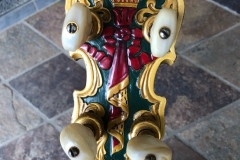 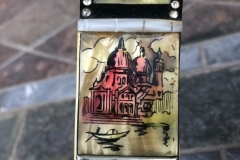 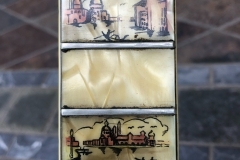 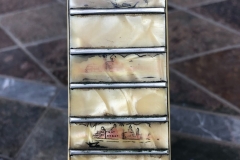 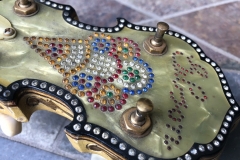 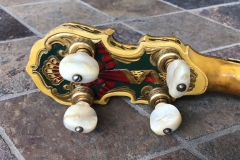 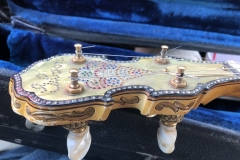 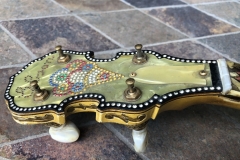 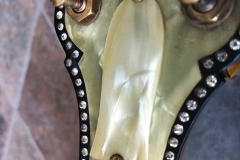 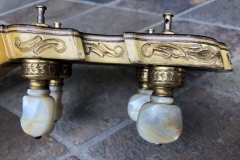 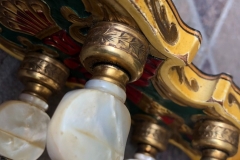 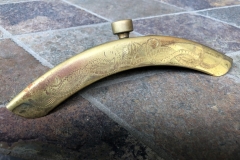 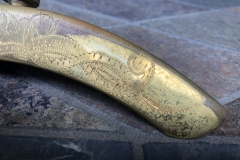 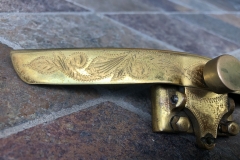 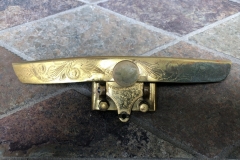 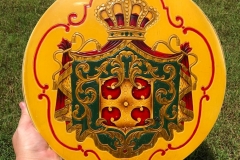 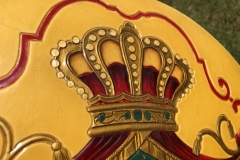 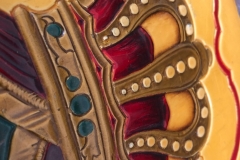 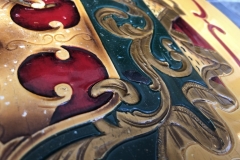 Gibson called the Florentine, introduced in early 1927, the “patrician leader among fine banjos” with “beauty that entrances the beholder”, “tone that inspires”, and “perfection that reveals itself with steadily increasing benefit to the player.”   One of the most ornate Gibson Mastertone banjos ever produced, the Florentine was offered in a variety of woods and finishes; this example is in the finish referred to by Gibson as “white holly”, which was actually white-painted maple.

#9284-1 dates to 1929 (see Gibson banjo serial numbers vs. factory order numbers) and is one of only two Florentines known to have been made with the twenty-fret “plectrum-tenor” fingerboard normally seen only on the Royal P-T, introduced in January 1929 and hailed by Gibson as “a triumph of banjo discovery” consisting of “two banjos in one”, the idea being that it could be tuned and played either as a plectrum or a tenor.

The fingerboard, resonator, and rim are trimmed with multicolor sparkle “Christmas tree binding”, one of several trim options offered on the Florentine; there is elaborate engraving on the flange plate, “two-hump” Grover tailpiece, Grover “two-band” tuners (with real mother-of-pearl buttons), stretcher band, and armrest.  The armrest activates a “Vibrato Tone-Master” mute, a feature introduced with the style 6 Mastertone in 1928, which Gibson promised would provide the player “tonal control like an organ.”

With a “bin number” of 1, this example was in all likelihood a custom order and therefore the only banjo in lot #9284. Significantly, #9284-1 is equipped with one of the earliest examples of the high-profile, full-weight, twenty-hole flathead tone ring; lacking the standard Florentine engraving pattern on the skirt, this ring is the type used in Granada plectrum and five-string banjos of period, with a weight of two pounds, fifteen ounces. The cut Mastertone decal is common in original flathead Mastertones of this period.

#9284-1 remains in well-played but original condition, including its #522 Geib and Schaefer case with internal zippered liner. It is set up with an ebony, bone-topped #55 bridge, the most expensive offered by Gibson at the time, and is accompanied by the original sheet of instructions for the “Vibrato Tone-Master” mute. Gibson’s factory ledgers record the return of this banjo to Wittich’s Music House of Reading, Pennsylvania on April 8, 1948 following an unspecified repair. The original owner of #9284-1 is said to have been a Sicilian immigrant who selected the Florentine due to its Italian theme.