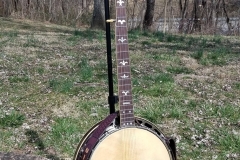 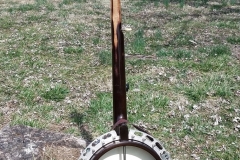 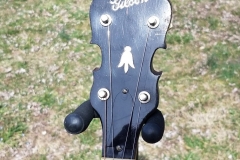 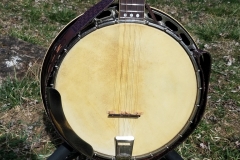 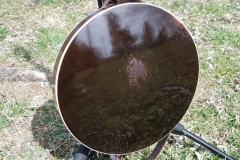 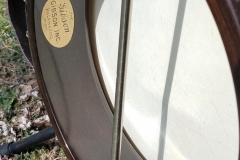 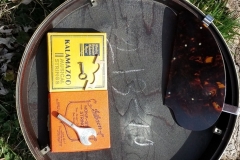 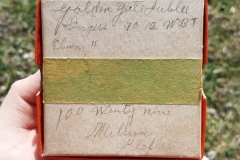 A Gibson catalog of the early 1930s described the RB-1 as providing “sparkling, bell-like brilliancy of tone; powerful volume and trueness equalled only by the famous Mastertone models.”  The same catalog claimed that the five-string banjo was “increasingly popular” and that there was “every indication that the future of this instrument will be a glorious one and that those who equip themselves to stand out as accomplished artists with the five-string banjo will profit accordingly.”  Gibson could well be accused of protesting too much, for the fact was that in the early 1930s the popularity of even the four-string banjo was seriously on the wane, and the five-string banjo’s fortunes had never been lower.  Almost the only market remaining for the five-string banjo was among string-band musicians of the rural southeast, and it’s therefore not surprising that RB-1 #213-10, dating to 1930 (see Gibson banjo serial numbers vs. factory order numbers), surfaced in 2020 in Reidsville, North Carolina; the banjo is reported to have spent most of its life to date in the Burlington, North Carolina area, where it was played in church for decades.