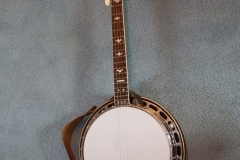 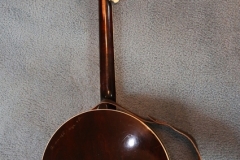 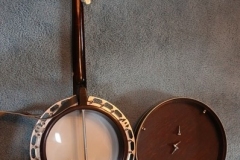 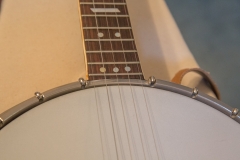 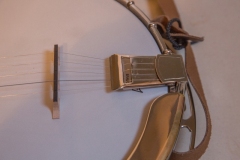 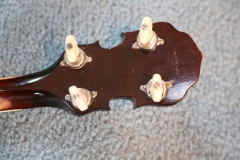 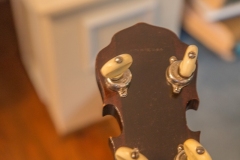 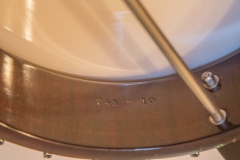 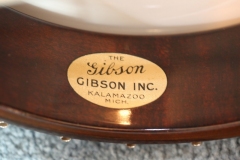 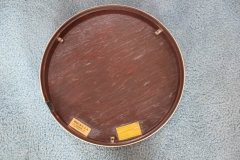 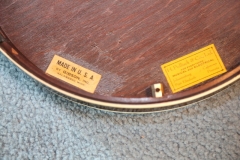 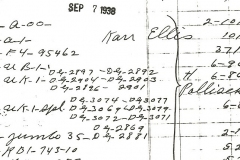 A Gibson catalog of the 1930s promised that the RB-1 offered “sparkling, bell-like brilliancy of tone” along with “powerful volume and trueness equalled only by the famous Mastertone models”.  #743-10 (see Gibson banjo serial numbers vs. factory order numbers) was shipped on September 7, 1938 to Gibson’s leading South African retailer of the time; the back of the peghead bears the “Made in the U.S.A.” stamp typical of export instruments and the inside of the resonator features both a “Made in U.S.A.” export sticker and the yellow sticker of H. Polliack.

The low-set, horizontal “Gibson” logo and lack of a handstop are features characteristic of late 1930s style 1 Gibson banjos; although many style 1 banjos began featuring simple dot fingerboard inlays as early as 1936 (see RB-1 #919-5), this example retains the “fleur-de-lis” inlay pattern more commonly associated with the model.  As was common practice in this period, this banjo is marked with a true serial number stamped on the back of the peghead.