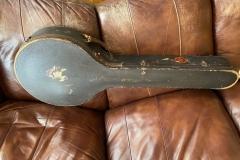 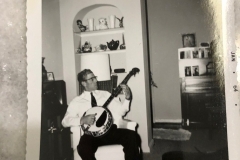 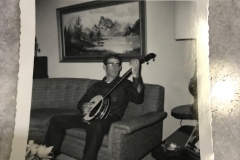 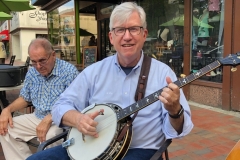 A Gibson catalog of the early 1930s described the RB-1 as providing “sparkling, bell-like brilliancy of tone; powerful volume and trueness equalled only by the famous Mastertone models.”  The same catalog claimed that the five-string banjo was “increasingly popular” and that there was “every indication that the future of this instrument will be a glorious one and that those who equip themselves to stand out as accomplished artists with the five-string banjo will profit accordingly.”  Gibson could well be accused of protesting too much, for the fact was that in the early 1930s the popularity of even the four-string banjo was seriously on the wane, and the five-string banjo’s fortunes had never been lower.  Almost the only market remaining for the five-string banjo was among string-band musicians of the rural southeast, and this example belonged to just such a player. #9775-10 dates to 1930 (see Gibson banjo serial numbers vs. factory order numbers) and was owned Henry Lee DeHart, Jr. of Martinsville, Virginia, who performed with his band The Dixie Pickers.

This RB-1 is a catalog-standard example for the period with dark-finished straight-grain maple, nickel-plated hardware, a fiddle-shaped peghead, fleur-de-lis inlays, a one-piece cast flange, and a small-diameter brass hoop on top of the full-thickness maple rim.  The banjo remains in its original flannel-lined #521 case by Geib and Schaefer, decorated on the inside of the lid by Mr. DeHart with a clipping from Gibson’s prewar “Mastertone” magazine.