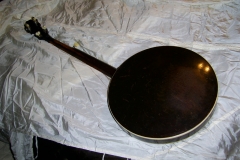 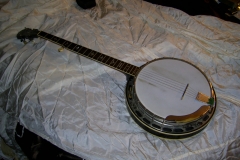 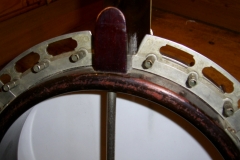 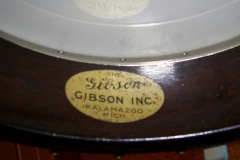 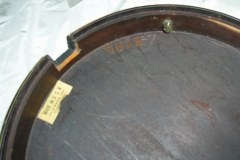 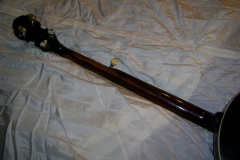 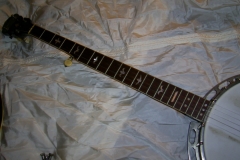 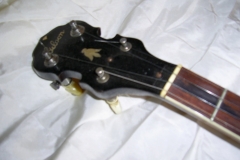 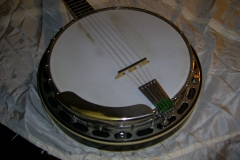 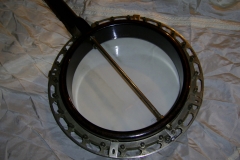 Style 1 was a mainstay of Gibson’s lower-end, non-Mastertone banjo line from the 1920s through World War II.  By the 1930s the specifications for style 1 included a pot metal one-piece flange and three-ply maple rim with nickel-plated hardware and a dark-finished maple neck and resonator; there was white binding on the neck and both edges of the resonator.  Even though the Mastertone models had by this time gone to the double-cut peghead shape, the fiddle-shaped peghead was retained on style 1, with a minor modification–the two small indentations normally found under the fourth- and first-string tuners were absent.  The rosewood fingerboard was inlaid with a fleur-de-lis inlay pattern which is also known by such varying names as “bats” and “flying birds”; in the late 1930s, this inlay pattern was replaced on style 1 by a simple dot pattern, although the “inverted bud” peghead inlay remained. Style 1 banjos have an oval “The Gibson” label inside the rim which is similar to the Mastertone label found on the higher models.

Style 1 banjos, like others in the non-Mastertone line, had a small-diameter brass hoop on top of the rim rather than a heavy cast tone ring.  The rim of #9846-7 (see Gibson banjo serial numbers vs. factory order numbers) has been cut down and a twenty-hole flathead tone ring of unknown manufacture installed.  The “Made in U.S.A.” sticker in the resonator indicates that the banjo was made for export.  The second- and third-string tuners have been replaced with d-tuners by Bill Keith, and the original Grover “first model” tailpiece has been replaced with a Kerschner type.  This rare original five-string example retains its original friction fifth-string peg.