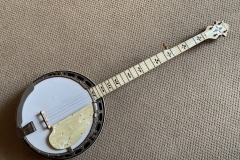 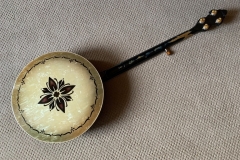 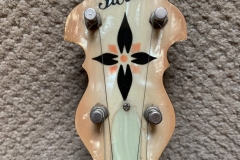 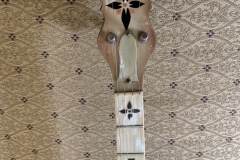 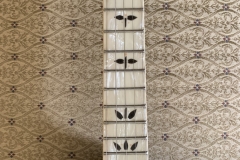 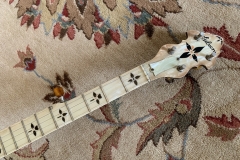 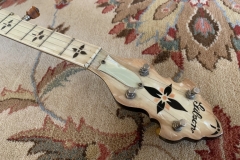 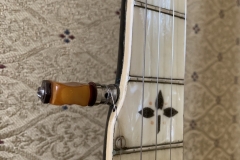 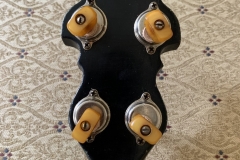 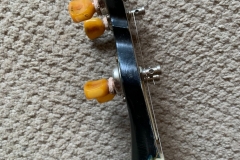 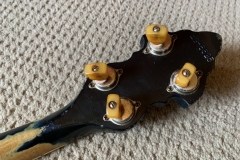 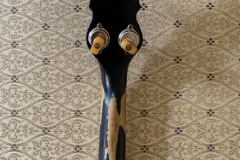 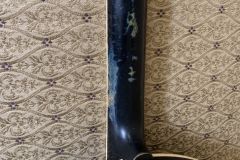 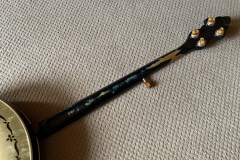 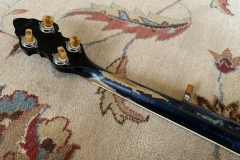 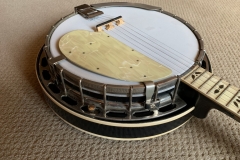 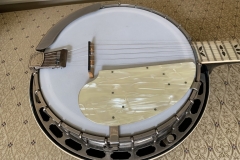 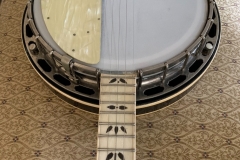 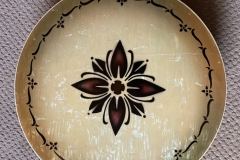 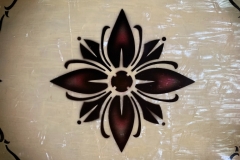 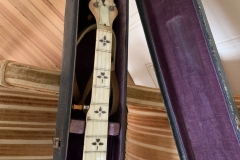 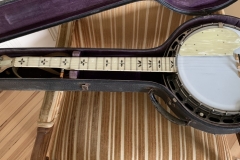 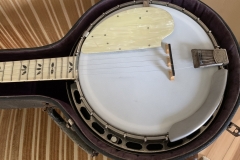 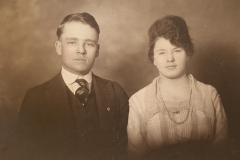 “The flashiest five-string banjo made” was how Gibson’s 1935 catalog described the RB-11.   Introduced in 1931, style 11 used pearloid, blue paint, and silkscreened designs to dress up what was one of the company’s less-expensive banjo offerings; besides lending “color” and “flash”, the pearloid and paint provided Gibson with a way to use cosmetically flawed wood which might not have been suitable for more expensive models.

Style 11 banjos remained in production into the World War II years; #EG-6525 (see Gibson banjo serial numbers vs. factory order numbers) was shipped on November 30, 1939 to “Music Mart” (location unknown). Music Mart may well have been a distributor, since this banjo is known to have been bought new at G&M Music in Winchester, Virginia. Its original owner was William Erle Edwards (April 25, 1899–December 25, 1993), a Winchester resident and attorney, who is pictured above with his wife Encie Shanholtz Edwards (April 15, 1902–September 15, 1991). #EG-6525 remains in original condition and conforms to standard specifications for the RB-11 of the period with nickel-plated hardware, a “window” or “Grover first model” tailpiece, a small-diameter brass hoop serving as a rudimentary tone ring, Kluson tuners with Catalin buttons, and #401-N head guard (a factory option). Although the banjo was shipped to Music Mart in a #121 chipboard case, it is now housed in a period flannel-lined #521 case by Geib. Current owner David McLaughlin tells us more about this original prewar five-string:

“I first heard of William Erle Edwards (known as just Erle Edwards or ‘Judge Erle’) in about 1981. I was always asking around (and still do) about old musical instruments. Somebody told me that there was a retired circuit court judge in Winchester that played the five-string banjo and had ‘one of those old fake pearl Gibsons’. So, I got in touch with him. It was not for sale at any price. He told me he’d bought it at G&M Music in 1940. He was forty-one years old at the time he acquired it, having been born in 1899. G&M Music began in 1937 and is still here in Winchester.

When Judge Erle died in 1993, his grandson, who lived just two blocks from my house, inherited the banjo. He took it back to G&M because the original hide head was split and he thought he’d take a few lessons with it. I did a little bit of setup work for him, also. After giving up on the lessons, he told me he’d like to sell it to me, but his mother, the daughter of Judge Erle, didn’t want him to sell it, for sentimental reasons. So the grandson kept it unplayed under a bed for many years.

After the grandson’s mother died, he sold it to me. With the exception of the original split hide head which was thrown away, I am keeping it all original, as I do all old Gibson banjos. I have had it set up with both its original inner rim hoop, and an outer rim hoop. It sounds amazing either way.

Judge Erle was strictly an amateur player who played only in the key of C and never went up beyond the seventh fret, according to all who knew him. The family says there are no known photos of him with the banjo. There had been a cassette tape of him playing the banjo in his old age, but it was destroyed in a flooded basement a few years ago.

One interesting manufacturing error with the banjo is that it came new with only two resonator thumb screws because although it has three lugs and three l-brackets, one bracket on the rim is half an inch away from the corresponding lug on the resonator! Judge Earle said that’s the way it came.”