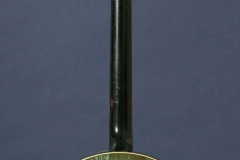 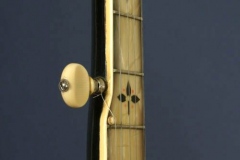 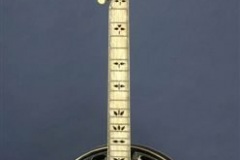 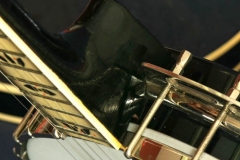 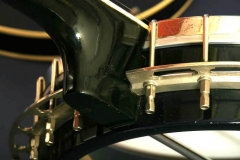 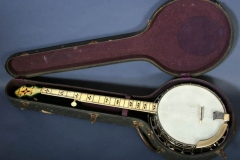 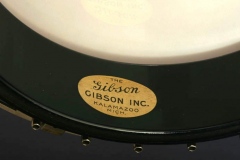 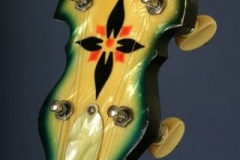 “The flashiest five-string banjo made” was how Gibson’s 1935 catalog described the RB-11.   Style 11 was Gibson’s attempt to dress up a lower-priced banjo through the use of pearloid decorated with red and black silkscreened designs on the back of the resonator as well as the fingerboard and peghead, along with a colored finish on the rim, the sides of the resonator, and the back of the neck.  Blue is the most commonly seen color for this finish, and style 11s are consequently sometimes referred to as “blue banjos”.

Style 11 banjos were not Mastertones and only had a small-diameter brass hoop sitting on top of the rim; they did, however, share the one-piece flange and maple rim of styles 3, 4, and Granada, and thus make excellent five-string conversions with the addition of a new neck and a tone ring.  This example is a rare original five-string and has not been fitted with a tone ring.

The hardware is nickel-plated, the tailpiece is what 1930s Gibson catalogs refer to as the “Grover first model”, and the tuners are Grovers held on by two screws.   As is frequently the case with style 11 banjos, there is no serial number or factory order number.  The banjo remains in its original hard shell case.

In 1930 only, Gibson made an S.S. Stewart-labeled tenor banjo model for New York City-based musical instrument distributor Buegeleisen and Jacobson which was essentially the same banjo as the Gibson-brand style 11.  Earl Scruggs was playing an RB-11 when he joined Bill Monroe’s Blue Grass Boys in 1945.