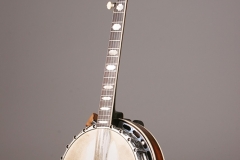 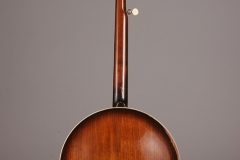 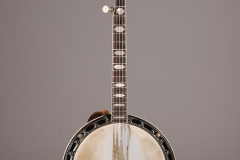 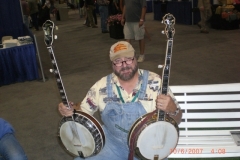 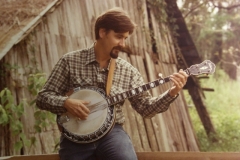 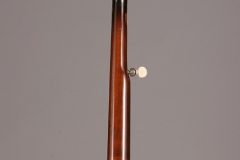 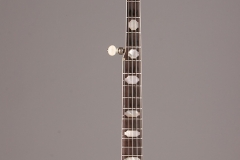 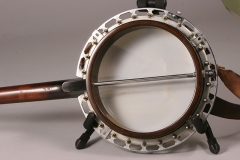 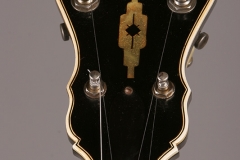 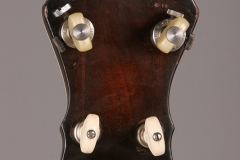 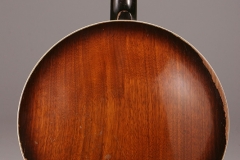 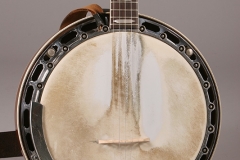 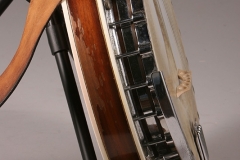 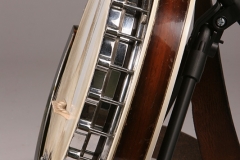 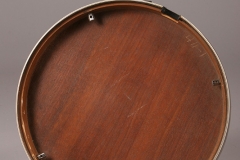 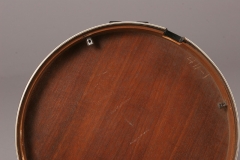 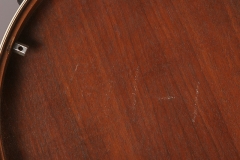 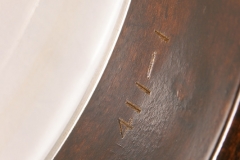 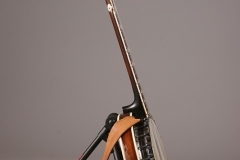 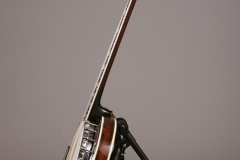 In the late 1930s, Gibson attempted to revive flagging banjo sales with the introduction of the radical new line of top-tension Mastertones, much as they had tried to recapture the dying mandolin market in the mid-1920s with Lloyd Loar’s Master Model series.  Like the Loar instruments, the top-tensions could not reverse prevailing musical trends and sold poorly; also like the Loars, the top-tensions are today revered as some of the finest instruments ever produced by the Gibson company.  Top-tension Mastertones were offered in styles 7, 12, and 18; the lucky owner of this beautiful RB-12 tells us its story:

“This is RB-12 #411-1.  It is an original five-string flathead top-tension Mastertone matching catalog description in every respect. . . I have owned this banjo since 1972, having acquired it in a trade with George Gruhn. . . It was in virtually new, unplayed condition when I got it and remains in excellent condition.  Lovingly and reverently played, it has been my main performing instrument, conditions and common sense permitting, all these years and I must claim the responsibility for the normal playing wear it shows.

When I first set it up to play I stored the original tuning pegs and case, installing Keith pegs and Planets that required no alteration.  I have partially refretted it twice.  Most recently I replaced the first fourteen frets and did some very careful fretboard restoration that had become necessary since the first refret (1-10) a decade or more ago.  If anyone is curious about the hex nuts on the hooks. . . I put them on as a precaution against stripping any of the threads in the flange.  All the original threads are intact and the careful coordination of the backup nuts takes up some of the load when adjusting.  A number of top-tension I know of have helicoil inserts or conventional nuts doing the job.  The backup nuts work. #411-1 has no stripped threads.

This banjo has the entire palette of sounds one expects from an original flathead and it is an inspiration to my playing that I continue to enjoy and gratefully appreciate–Mike Johnson (Georgia/Florida).”

The early history of #411-1 (see Gibson banjo serial numbers vs. factory order numbers) presents a bit of a puzzle.  Gibson records show that it was shipped on May 9th, 1938 to Fred Walker, a Gibson dealer in Baltimore, Maryland; former owner Jeff Tordoff, however, recalls buying it in the early 1970s from a retired man in Lansing, Michigan named “Red”, who claimed to have bought the banjo at the Gibson factory in Kalamazoo circa 1941.  The most likely explanation is that Fred Walker returned the banjo to Gibson unsold where it was later bought by “Red”.