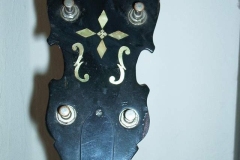 Style 3 was the lowest-priced and best-selling model in Gibson’s Mastertone line from its introduction in 1925 until it was renamed style 75 in 1937.  Original five-string RB-3s are rare, and this 1928 example (see Gibson banjo serial numbers vs. factory order numbers) remains in excellent original condition with the exception of the fingerboard, which was replaced by Gibson in the 1950s.  In keeping with standard practice for the time, no attempt at historical accuracy was made and the bowtie-inlay fingerboard of the then-current RB-250 was installed.  The original friction fifth-string peg remains with the banjo but has been replaced by a geared tuner.