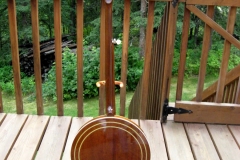 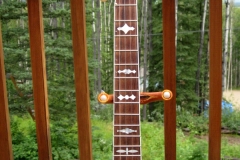 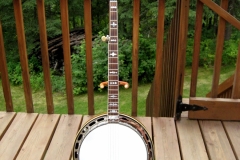 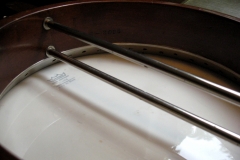 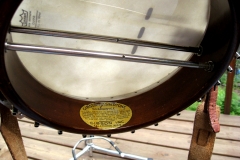 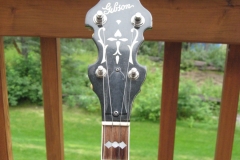 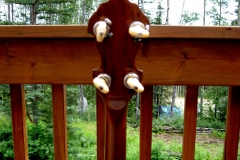 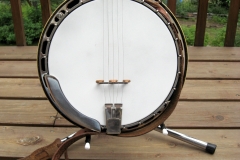 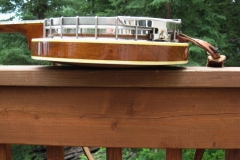 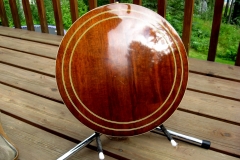 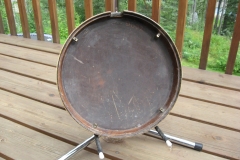 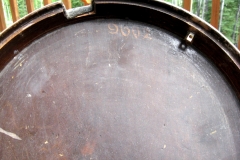 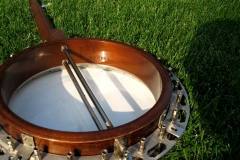 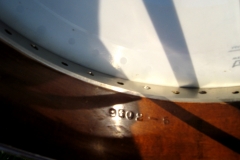 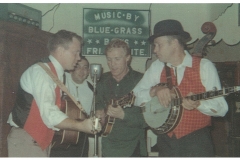 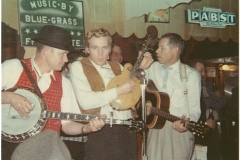 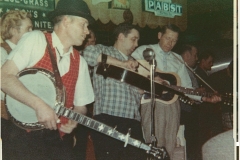 #9602-5 (see Gibson banjo serial numbers vs. factory order numbers) is a fine example of just such a banjo.  The original owner lived in Portsmouth, Ohio and his name has been reported as Sam Kiebler (or Kibler).  Genealogical records list a Howard Kiebler (1904-1981) from Portsmouth but not a Sam, so the exact identity of the original owner remains in question.  The banjo was later owned for many years (circa 1959-1988) by Howard Aldridge of Springfield, Ohio and was acquired by its current owner in 1991.

The photos above show #9602-5 being played by Howard Aldridge in a bar in Springfield, Ohio circa 1965.  The other musicians shown are Frank Wakefield on mandolin, Ralph James on guitar, Landon Rowe on left-handed guitar, Russ Williams on bass, and Luke Pauling on dobro.

Like many great-sounding old banjos, #9602-5 has been played enthusiastically over the years and so some repairs have been necessary along the way.  The current owner outlines these:

“The photos show the ebony fingerboard Howard had put on the banjo.  The original leaves and bows board had become hopelessly pitted, so Howard, being a very good craftsman, built a new board of ebony using most of the original inlays, but creating his own design.  When I bought the banjo, I had Frank Neat build a new rosewood board of original design.  This is what you see in the photos.

Howard also refinished the neck and resonator and had the flange replated.  In the process, a piece of the outer metal on one of the holes broke out.  Also the person doing it buffed the edges to where they were no longer sharp.  The flange held up until 1996 when it cracked through.  Several years ago I bought a Kalamazoo on eBay that had a beautiful flange, and that is what is on the banjo now.

When I bought the banjo it had a brass tension hoop of unknown origin.  In 2007 I was fortunate enough to find a prewar pot metal hoop from an RB-1.  That is what is in the photos.

Like many other prewar tone rings, this one has had a previous owner drill extra holes in it.  This one has 9 extra on the upper hemisphere as one would hold the instrument.”