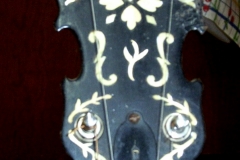 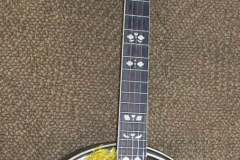 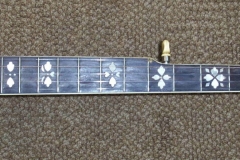 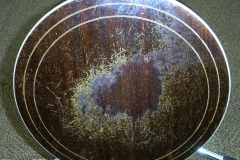 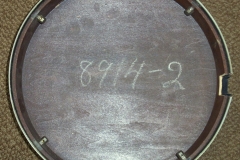 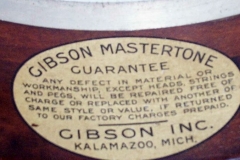 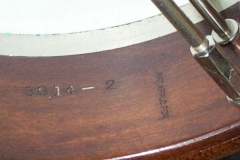 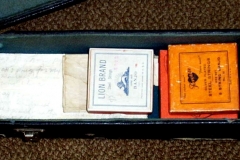 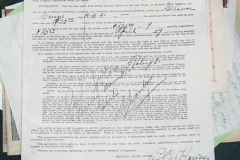 The banjo pictured above is an original five-string RB-4 Mastertone with a no-hole archtop tone ring, originally sold to Reid Rakes by Beckley Music Store in Beckley, West Virginia on March 1, 1929.  In most respects it conforms to standard catalog specifications for style 4 for this period with mahogany neck, mahogany resonator with two concentric purfling rings on the back, two-piece flange, notched tension hoop with round hooks, nickel plating, Presto tailpiece, fiddle-shaped peghead, hearts and flowers inlay, and Brazilian rosewood fingerboard.  An unusual feature of this banjo is the presence of “Mastertone” in individual letters on the peghead rather than in a mother-of-pearl block on the fingerboard; the peghead placement of the Mastertone logo is normally seen only in banjos produced in 1925, the first year of the Gibson Mastertone banjo.

As is the case with the other observed banjos from lot #8914, a splice is visible on the inside of the rim, indicating that this rim had originally been prepped with holes for a ball-bearing tone ring assembly and was then modified for a cast raised-head ring by removing the drilled upper portion of the rim and replacing it with a solid cap.