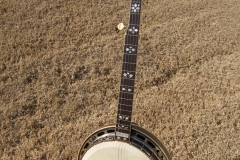 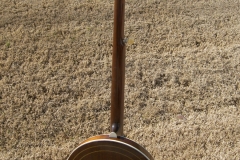 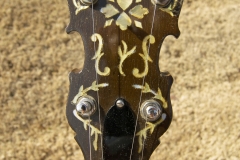 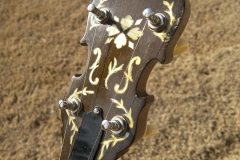 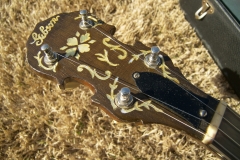 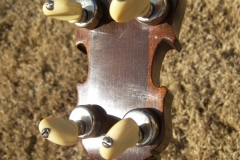 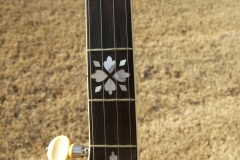 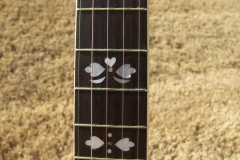 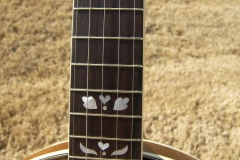 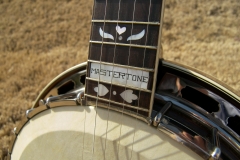 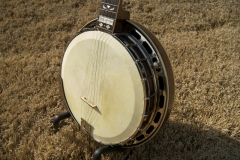 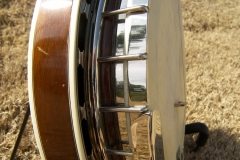 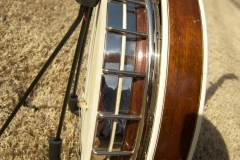 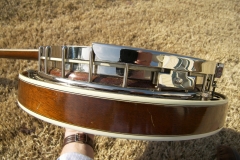 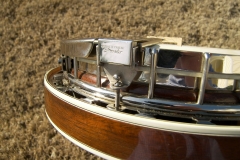 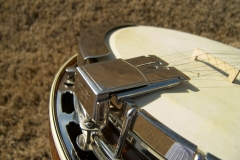 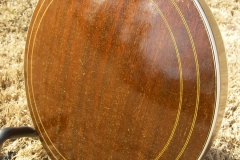 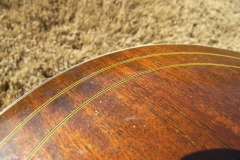 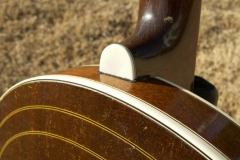 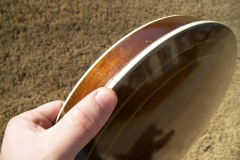 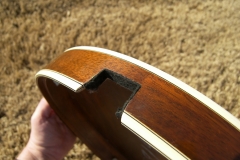 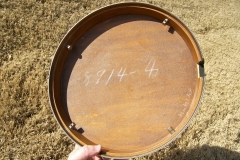 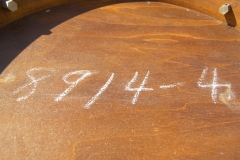 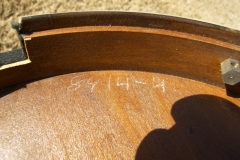 There is no rarer iteration of the style 4 Mastertone than the version with tube-and-plate flange and solid raised-head tone ring, only produced circa 1927-1928; such style 4 banjos with original five-string necks are so rare as to be practically nonexistent, with a total estimated production of no more than ten units.  #8914-4 (see Gibson banjo serial numbers vs. factory order numbers) is an example of just such a banjo in completely original, excellent condition, including its friction fifth-string peg and nut, original frets, setup instructions from the factory, and #521 “Masterkraft” case by Geib and Schaefer including not one but two keys.

This banjo conforms in all respects to standard specifications at the time for an RB-4; however, close inspection does reveal some hidden irregularities which give an insight into Gibson’s banjo production practices of the time.  The factory order number #8380-2 can be faintly seen written in pencil inside the resonator just above the large chalk number; the same factory order number is also stamped on the outside of the rim at the neck junction.  The lot #8380 dates to 1926 and an original ball-bearing RB-4 #8380-9 has recently surfaced; #8914-4 was apparently assembled using reworked components originally destined for RB-4 #8380-2 which remained in inventory at the factory two years later.  As is the case with the other observed banjos from lot #8914, a splice is visible on the inside of the rim, indicating that this rim had originally been prepped with holes for a ball-bearing tone ring assembly and was then modified for a cast raised-head ring by removing the drilled upper portion of the rim and replacing it with a solid cap.  One additional detail showing that this rim was reworked at the factory is the presence of additional screw holes for the L-brackets in the earlier orientation with the lower hole on the left and the upper hole on the right.

The original owner of #8914-4 was Cecil George (August 1893-March 1983), a lifelong resident of Hillsborough County, New Hampshire.  Mr. George worked for the New Hampshire Highway Department, in a cotton mill, and finally for the Public Service Company of New Hampshire, from which he retired; records show that Mr. George registered for the draft in both World War I and World War II.  The banjo remained in Mr. George’s family until February 2012.

Observed banjos from lot #8914 demonstrate a wide array of features, consistent with these instruments having remained in inventory at the factory for some time and being subjected to various forms of reworking and reassembly to finally get them out the door.  Other banjos from lot #8914 featured on this site include RB-4 #8914-2, the “Reid Rakes”; RB-4/TB-3 Mastertone #8914-3, the “Paul Schantz; and RB-4/RB-3 Mastertone #8914-8.