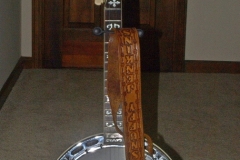 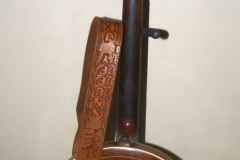 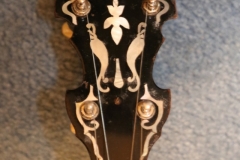 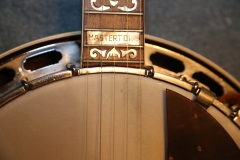 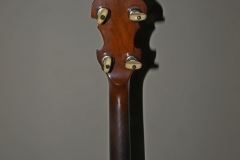 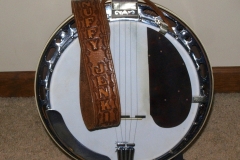 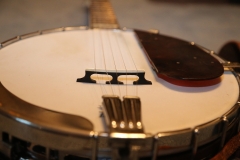 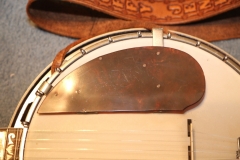 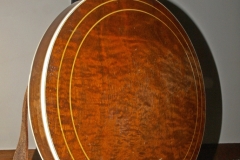 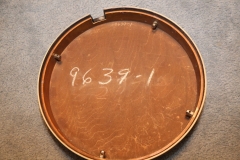 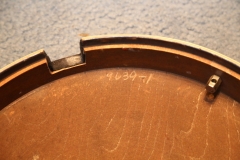 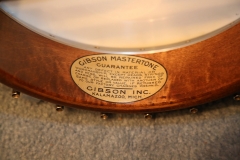 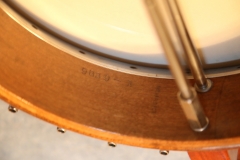 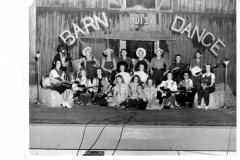 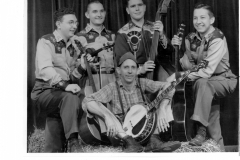 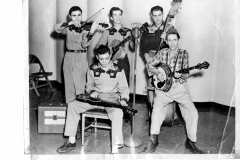 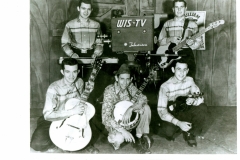 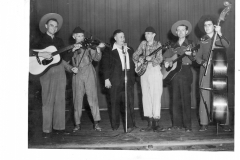 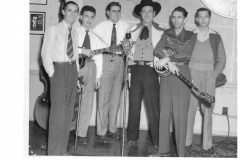 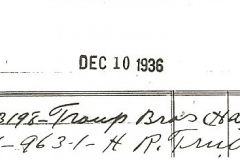 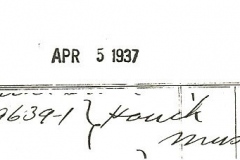 DeWitt “Snuffy” Jenkins (October 27, 1908–April 29, 1990) was a native of Harris, North Carolina and a pioneer of the three-finger picking style on the five-string banjo. Playing on radio station WIS in Columbia, South Carolina, Jenkins was an early influence on bluegrass banjo pioneers Earl Scruggs and Don Reno; RB-Granada Mastertone #9584-3, used by Scruggs for most of his career, was previously owned by Jenkins.

RB-4 Mastertone #9639-1 would date to 1930 based on its factory order number (see Gibson banjo serial numbers vs. factory order numbers) but it was not uncommon for slow-moving banjo models, such as five-string Msatertones, to remain unsold at the factory for long periods of time, and this example first appears in Gibson’s factory ledgers being shipped on December 10, 1936 (with its factory order number incorrectly recorded as #963-1) to H.R. Truitt, identified by researcher Joe Spann as the proprietor of Truitt Music House in Pittsburgh, Pennsylvania. The banjo was evidently returned to the factory unsold and was shipped again on April 5, 1937 to Houck Music Company, identified by Joe Spann as having been located in Memphis, Tennessee. Jenkins reported that he acquired the banjo in a Spartanburg, South Carolina pawn shop circa 1940.

For the most part, #9639-1 conforms to catalog specifications for the model with walnut neck and resonator, chrome-plated hardware, and flying eagle inlays; one unusual feature is that rather than the two concentric rings of multicolored parquetry typical of the style 4 of the 1930s, the resonator instead features concentric rings of thin white/black/white purfling as seen on the mahogany style 4 of the 1920s. The #400 imitation tortoise head guard was a factory option and, when present, was usually discarded by fingerstyle five-string players; Jenkins left his on the banjo his entire life, but did cut the head guard down slightly to prevents its getting in the way of his picking hand.