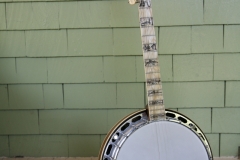 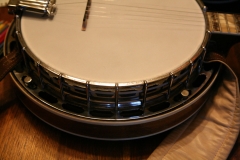 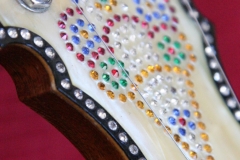 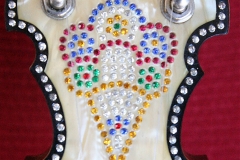 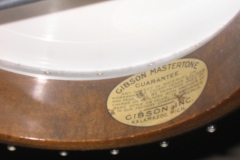 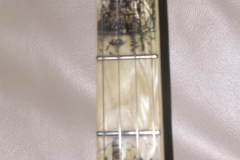 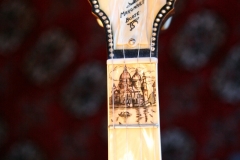 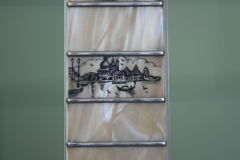 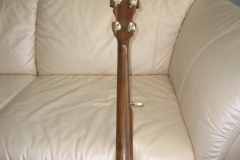 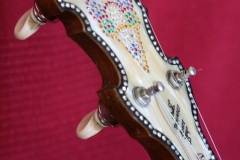 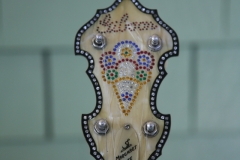 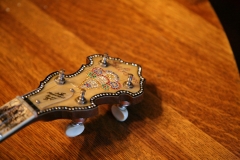 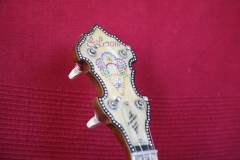 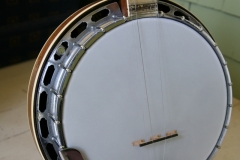 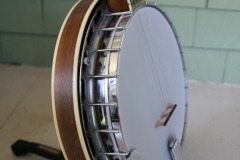 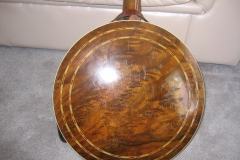 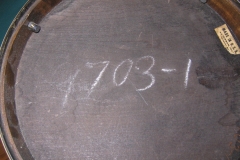 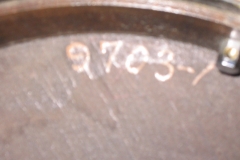 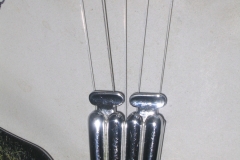 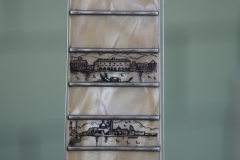 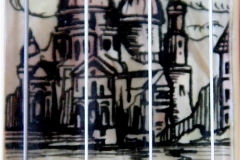 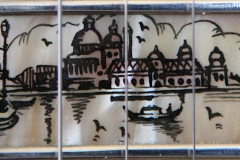 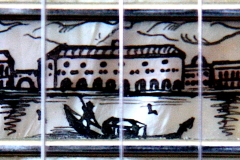 In 1929, style 4 changed from the earlier mahogany model with two-piece flange, fiddle-shaped peghead, and nickel plating to a walnut model with one-piece flange, two concentric rings of multicolored marquetry on the resonator back, chrome-plated hardware, and a double-cut peghead.  The style 4 of this period was normally seen with a rosewood fingerboard and either flying eagle or hearts and flowers inlays; this banjo is extraordinarily rare in that it not only is an original five-string with a flathead tone ring, but the neck features the ornate peghead overlay and fingerboard of the Florentine model with hand-painted scenes of Venice and the Gibson logo with a bouquet of flowers (more commonly referred to as a multi-scoop ice cream cone) in rhinestones on the peghead.  Finding a prewar Gibson banjo with this peghead overlay and fingerboard is remarkable since no five-string Florentines are known to have been made in the prewar period.  This banjo remains in excellent original condition including its friction fifth-string peg.  The truss rod cover is engraved with the name of original owner Margaret Boote.

Originally made for export to Canada, #9703-1 (see Gibson banjo serial numbers vs. factory order numbers) banjo bears a “Made in U.S.A.” label inside the resonator.  The Mastertone label has been cut but the banjo has been verified as an original flathead.  This banjo was custom ordered and most likely a rim already made up for an archtop tone ring would have been altered at the factory to accept the flathead ring.

Owner Dale Keslering fills us in on the story of this amazing banjo: “I was playing in a music store about fifteen years ago in British Columbia, Canada and an older man came in and listened for a while and said he had an old Gibson. He went on to tell me that his father-in-law was the first Gibson dealer in Canada and his father-in-law had seven daughters and they were all musicians. During the 30’s he sold instruments and taught music–up to 80 students a week. His daughter Margaret also taught at that time. He had custom ordered this banjo for her. If you look in the old Gibson catalogs you will see pictures of him–Herbert and the Herbert Boote Orchestra. He toured all over the states playing also. Also in the old catalogs you will see the Boote Trio–this was three of his daughters including Margaret. I became good friends with them and finally had the chance to purchase it”.