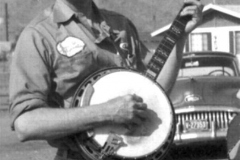 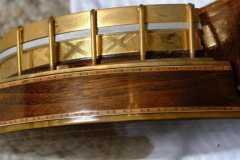 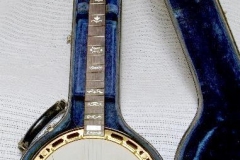 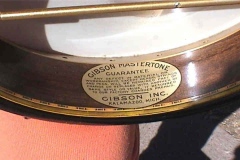 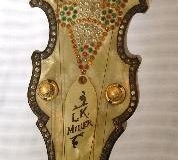 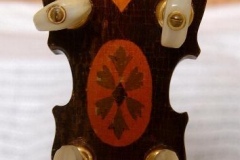 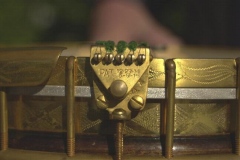 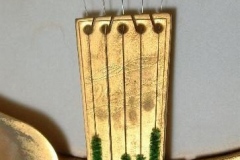 Style 5 was included in the original Gibson Mastertone banjo line of 1925, one model above the Granada, and remained in production until about 1929 when it was replaced by style 6.  Typical style 5 banjos were gold-plated and engraved, with two-piece flanges and either ball-bearing or archtop tone rings.  The hardware was gold-plated and heavily engraved, and other ornamentation included multicolored wood purfling and multicolored wood inlay on the back of the peghead.  The inlays were wreath pattern and the neck and resonator were walnut.

This banjo is a highly unusual original five-string style 5 with the rhinestone-inlaid pearloid peghead overlay typically seen on the Florentine.  The wood is walnut and the binding is gold pearloid; the flange is two-piece.  The Kerschner tailpiece is engraved “DeLuxe”.  The first-fret inlay is not normally seen in the wreath pattern, and the tone ring engraving is the type normally used on style 6 banjos.  The tone ring is an original prewar high-profile flathead; since the flathead tone ring was not introduced until several years after the factory order number date of this banjo, and because style 6 also did not exist in 1926, this banjo was most likely assembled as a custom order by Gibson in the early thirties using a combination of older and new parts.  #8267-1 (see Gibson banjo serial numbers vs. factory order numbers) bears witness to some extensive reworking before it ever left the Gibson factory; originally made for a ball-bearing tone ring assembly, the rim shows a splice where the upper part containing the cavities for the ball bearings was cut away and wood was added to bring the rim back up to full height.  The rim was then machined down to accept the flathead tone ring, cutting the Mastertone label in the process.  The truss rod cover is engraved with the name of the original owner, L.K. Miller.  Mr. Miller is known to have owned other prewar Gibson banjos and is said to have visited the factory in Kalamazoo where he ordered instruments to his specifications.

Previous owner Charlie Curell, father of current owner Bob Curell, is pictured above with #8267-1 circa 1955.