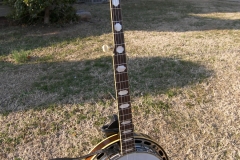 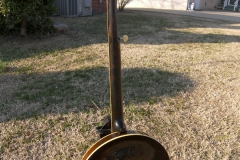 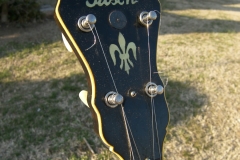 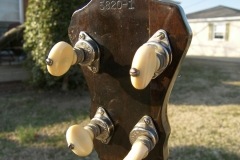 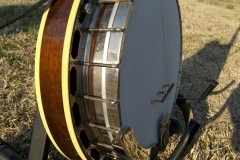 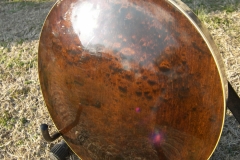 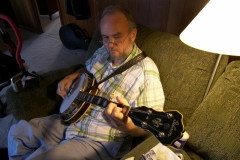 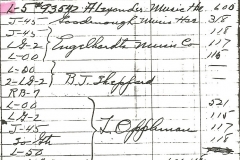 With the United States’ entry into World War II, wartime material restrictions meant that no new banjo hardware could be manufactured.  Banjo production had already decreased dramatically from its peak in the 1920s, and in the wartime period Gibson employees would sometimes search factory inventory for any remaining parts from which banjos could be assembled, even if the resulting instruments were a mismatch of various models.  #5820-1 (see Gibson banjo serial numbers vs. factory order numbers) is an example of just such a “floor-sweep” banjo. .  The maple neck and solid, carved “bird’s-eye” maple resonator are typical of the top-tension RB-7, although the rosewood fingerboard is inlaid with the “stairstep block” design usually seen on style 12 and style 18 top-tension models.  The fleur-de-lis headstock inlay was not a standard specification on any Gibson banjo but is frequently seen on instruments from the late prewar and wartime periods (see PB-7 Mastertone #E3281-4, PB-7 Mastertone #E3281-6, TB-7 Mastertone #F4713-2, TB-18 Mastertone #E2753-1, and TB-18 Mastertone #E3794-3).  The clunky, horizontal Gibson peghead logo is also typical of late prewar and wartime production.

Despite #5820-1’s top-tension-style neck and resonator, the pot features the standard Gibson head-tensioning system rather than the top-tension arrangement.  Three banjos from lot #5820 are known; #5820-2 (shipped July 23, 1943) and #5820-3 (shipped September 2, 1943) were both noted in the ledgers simply as RB-7s, with no indication that they were not actually top-tension banjos.  #5820-1 is not listed in factory shipping ledgers, but is likely the RB-7 recorded on October 8, 1943.  That day’s shipping included guitars of six different models going to L. Oppleman of Lynchburg, Viriginia, still in business today and advertising itself as “America’s Oldest Pawn Shop”, having been established in 1890 (it was a common practice for pawn shops to serve as Gibson dealers at the time, particularly in the South).  A bracket delineating the guitars shipped to Oppleman that day does not include the RB-7 listed on on the line above, for which no destination or factory order number is given; the #521 case which accompanied this RB-7 is listed alongside the first guitar in the Oppleman shipment.  Proximity in date to the shipments of the other two banjos from lot #5820, in addition to the known history of #5820-1 as having originally been owned by a resident of Lynchburg, make the identification fairly certain.  Gibson shipped fifty-two banjos to Oppleman between 1935 and 1943, the majority of them five-strings, including RB-00 #E2789-2; Oppleman would also be the first dealer to receive a postwar Gibson banjo, an RB-100 shipped on July 1, 1948.

The factory order number is stamped on the back of the peghead as was standard practice by this time (see Gibson banjo serial numbers vs. factory order numbers); there is no number or Mastertone label inside the rim, a common occurrence in late “floor-sweep” banjos.  #5820-1 remains in excellent, fully original condition.  Close inspection reveals more evidence of this banjo’s “floor-sweep” nature; all the hardware is nickel-plated with the exception of one of the resonator thumbscrews, which is chrome-plated.  In addition, there is a small hole in the back of the neck directly under the fifth-string nut, indicating that the worker installing the fifth-string nut may have accidentally drilled all the way through the neck, resulting in this neck’s being put aside and then used later when parts were in such short supply.  The armrest currently on the banjo is modern; there is no indication that an armrest was ever installed previously, and the resonator lug by the armrest is not offset by one flange hole as it usually was on banjos equipped with armrests.

#5820-1 spent the first sixty-five years of its life in Virginia; it remained in the possession of the second owner until late 2008.  The original owner affixed a silver three-cent piece dated 1858 to the peghead just under the Gibson logo.

Here are a few sound samples of this wonderful wartime five-string flathead Mastertone: