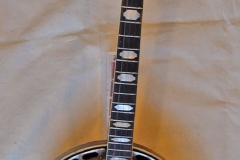 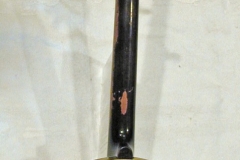 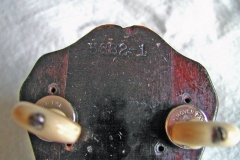 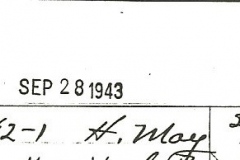 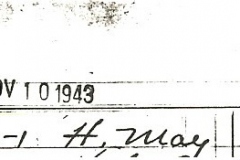 With the United States’ entry into World War II, wartime material restrictions meant that no new banjo hardware could be manufactured.  Banjo production had already decreased dramatically from its peak in the 1920s, and in the wartime period Gibson employees would sometimes search factory inventory for any remaining parts from which banjos could be assembled, even if the resulting instruments were a mismatch of various models.  #5882-1 (see Gibson banjo serial numbers vs. factory order numbers) is an original five-string flathead example of such a “floor-sweep” banjo.  The maple neck and solid, carved maple resonator are typical of the top-tension RB-7, although the fingerboard is inlaid with the “stairstep block” design usually seen on style 12 and style 18 top-tension models; the fleur-de-lis headstock inlay was not a standard specification on any Gibson banjo but is frequently seen on instruments from the late prewar and wartime periods. The armrest and Grover “two-hump” tailpiece are engraved, another departure from standard specifications for style 7 banjos.