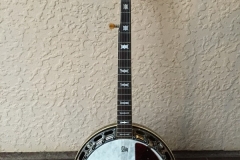 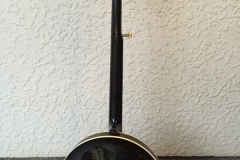 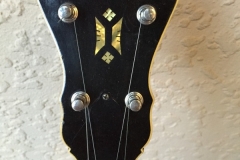 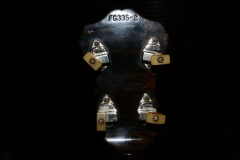 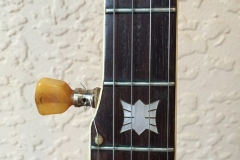 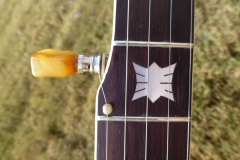 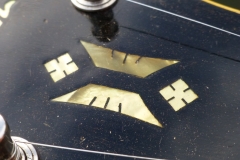 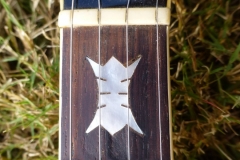 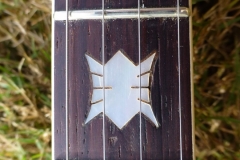 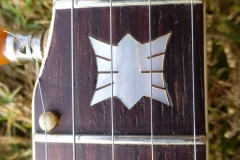 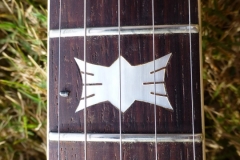 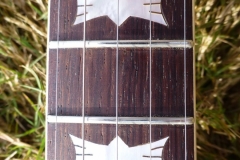 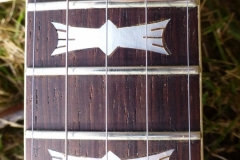 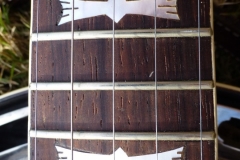 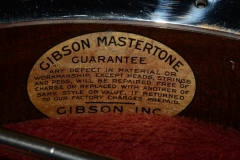 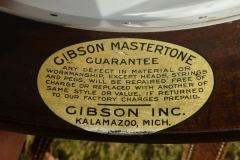 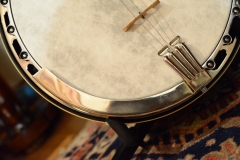 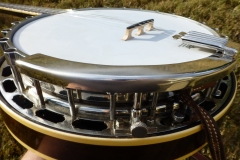 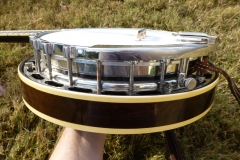 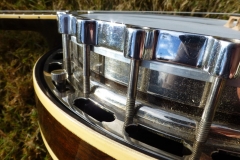 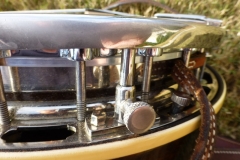 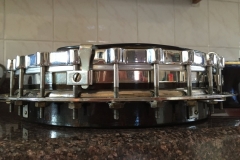 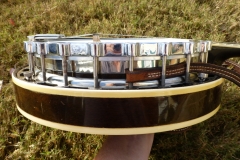 Faced with sharply declining banjo sales in the face of the guitar’s increasing popularity, Gibson made the decision in 1937 to dramatically overhaul its banjo line.  All existing Mastertone models were discontinued with the exception of style 3, which was lowered in price from $100 to $75 and emerged renamed as style 75.  The other Mastertones were replaced by the new top-tension models, trumpeted in the 1937 Gibson catalog as “the alarm clock that is going to wake up new possibilities in banjo playing”.

The top-tensions were innovative in a number of ways.  The most obvious was their namesake head-tightening design; players no longer had to remove the resonator to make the frequent tension adjustments necessitated by calfskin heads, since the brackets were adjusted from the top of the pot rather than the bottom.  Top-tensions borrowed other design features from Gibson’s extremely popular line of archtop guitars, including solid-wood resonators with carved backs, bold Art Deco looks with large, geometric inlay patterns, a more guitarlike peghead shape, and radiused fingerboards.  The flathead tone ring, which had been limited for the most part to plectrum and five-string Mastertones, became the standard for all top-tensions regardless of neck configuration.

The three top-tension styles, 7, 12, and 18, were roughly equivalent to the earlier styles 3, 4, and Granada. Style 7, pictured here, was made of maple with nickel-plated hardware and bowtie inlays similar to those used on the postwar style 250, but embellished with three slashes engraved on each side.  #FG335-2 is a rare original five-string; researcher Joe Spann estimates the total production of RB-7s at thirty-six units.

#FG335-2 remains in excellent original condition including its #521 Geib “red-line” case, factory #400 head guard, and bracket wrench.  A prior owner filed the tension hoop down slightly where the strings pass over it and soldered brass nuts on the bottom of the flange (the addition of such nuts is common on top-tension banjos due to the frequent stripping of the threads in the pot metal flange).  The tuners are the original DeLuxe Kluson “stairstep” type with amber Catalin buttons.  The tone ring is a twenty-hole flathead weighing two pounds, 15.4 ounces; the buffed inner surface is commonly seen beginning in the late 1930s and has led players and collectors to refer to these later flathead rings as the “shiny face” variety.  Mixed platings are commonly seen on top-tension banjos, and this example features a chrome-plated tension hoop, tailpiece bracket, and one coordinator rod.  An unusual feature of this banjo is the presence of highly figured maple in both the neck and resonator back, in contrast with style 7‘s typical straight-grained maple.

Gibson factory ledgers record the shipment of this banjo on July 1, 1940 to Barclay Bank via the international shipping company Karr Ellis.  Joe Spann has determined that H. Polliack and Co., Ltd., a major Gibson dealer in South Africa, had gone into bankruptcy and Barclay Bank had been appointed to serve as receiver for the company.  #FG335-2 was then acquired by Charlie Macrow, a noted performer, teacher, and Gibson endorser in the Johannesburg area.  A surviving bill of sale from Charlie Macrow Studios, seen above, documents the sale of this banjo to a G. Fitzpatrick in 1954; the initials “G.F.” have been scratched into the rim and resonator.  The next known transaction involving this RB-7 took place in the late 1950s when Johannesburg resident Reginald Lewis-Enright received it as payment for doing a car repair, presumably for G. Fitzpatrick.  The banjo remained in the Lewis-Enright family in suburban Johannesburg until May 2016.

#FG335-2 can be seen and heard in action in the video of the Hawaiian Christmas classic “Mele Kalikimaka” featuring John Driskell Hopkins with The Dappled Grays.