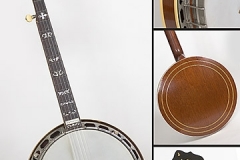 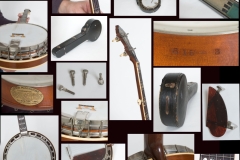 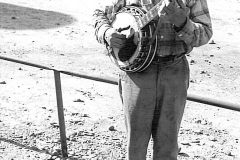 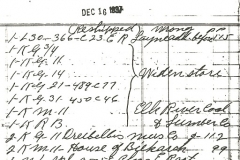 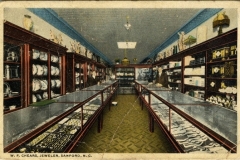 After the top-tension models were introduced in 1937, only one conventional Mastertone remained in production–style 3 underwent some slight changes, its price was lowered from $100 to $75, and it was rechristened style 75.

This original five-string Mastertone is one of the wonders of the banjo world.  It features a one-piece flange, a high-profile twenty-hole flathead tone ring, nickel-plated hardware, Presto tailpiece and a mahogany neck and resonator.  A number of different inlay patterns are seen on style 75 banjos; this example features the “flying eagle” inlay pattern on the rosewood fingerboard and the “leaves and bows” inlay on the double-cut peghead with the Gibson logo inlaid straight across rather than on a slant, a combination also seen on RB-75s from lot #752 (see RB-75 Mastertone #752-1).  The banjo is housed in its original “red-line” #521 case by Geib; the tuners are the original Grovers and the original friction fifth-string peg is intact.  A #400 imitation tortoise head guard, an original factory option, is also present.  The only nonoriginal parts on this banjo are the tailpiece adjustment screw and one of the bracket nuts.  Even the bridge is the original two-footed type installed on prewar Gibsons at the factory.

This banjo is from the same batch as RB-75 #518-1, which was owned by Earl Scruggs and then traded in the late 1940s to Don Reno who used it for the remainder of his career.  #518-3 (see Gibson banjo serial numbers vs. factory order numbers) was shipped from the Gibson factory on December 16, 1937 to W.F. Chears Jewelry in Sanford, North Carolina, pictured above on a World-War-I-era postcard.  In the pre-World-War-II period it was common, particularly in the rural south, for jewelry stores, furniture stores, and even pawn shops to hold Gibson dealerships.  The banjo was bought from W.F. Chears by Elbert Bridges Collins and remained in North Carolina until early 2005 when I helped banjo.com broker its sale for Mr. Collins’ son.