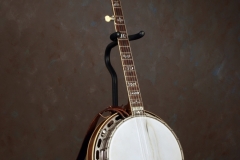 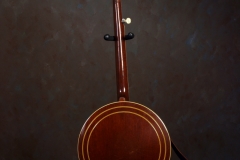 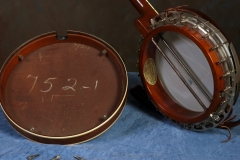 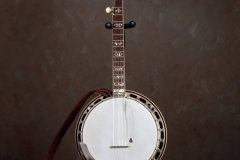 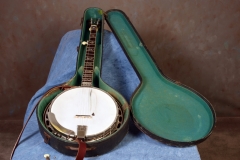 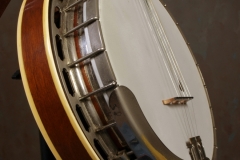 #752-1 (see Gibson banjo serial numbers vs. factory order numbers) dates to 1938 and spent its first fifty years in Kannapolis, North Carolina, where it was originally sold by the Bell Music Company.  A number of different inlay patterns are seen on style 75 banjos; this example features the “flying eagle” inlay pattern on the rosewood fingerboard and the “leaves and bows” inlay on the double-cut peghead with the Gibson logo inlaid straight across rather than on a slant, a combination also seen on RB-75s from lot #518. #752-1 remains in excellent original condition with its “red-line” #521 case by Geib.