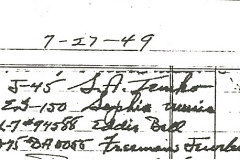 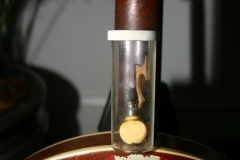 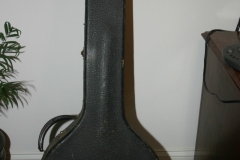 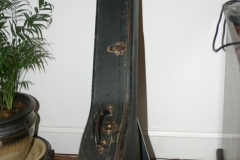 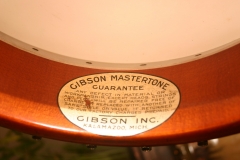 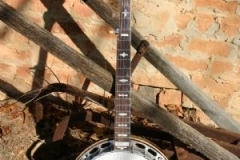 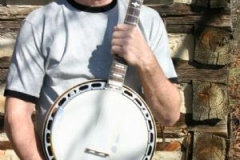 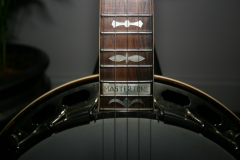 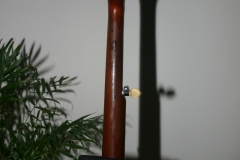 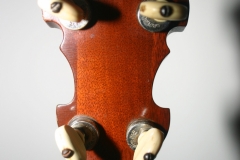 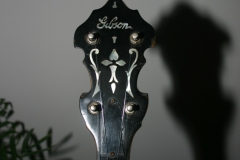 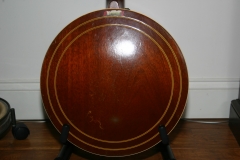 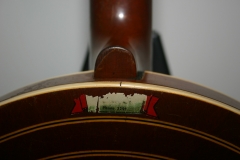 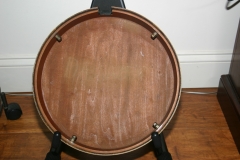 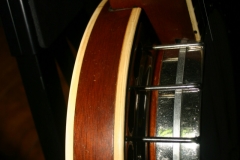 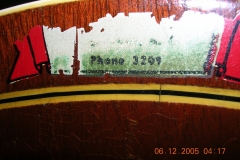 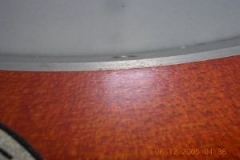 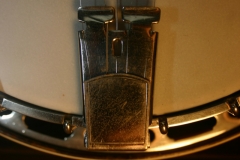 1937 was a year of great change in Gibson’s banjo line; Mastertone models 4, 6, Granada, Florentine, and All American were discontinued and replaced with the new top–tension styles 7, 12, and 18.   Of the previous Mastertone models, only style 3 survived; its price was lowered from $100 to $75 and, in keeping with Gibson’s new fashion for naming instruments after their prices, was renamed style 75.  #DA-5055 (see Gibson banjo serial numbers vs. factory order numbers) is a beautiful example of an RB-75; the date code “DA” indicates the year 1938.  It conforms to standard catalog specifications for style 75 with mahogany neck and resonator, one-piece flange, high-profile twenty-hole flathead tone ring, nickel-plated hardware, double-cut peghead, and rosewood fingerboard.  A variety of inlay patterns are seen on style 75 banjos, and #DA-5055 is inlaid with the full ten-piece leaves and bows pattern; the majority of leaves-and-bows RB-75s had a truncated inlay set with only eight pieces.

No original shipment information for #DA-5055 appears in Gibson’s shipping ledgers, although the banjo was logged on July 27, 1949 as being returned to Freeman’s Jewelry (location unknown) after an unspecified repair.  There is a decal on the back of the resonator bearing the name and phone number of, High Point Music Supply in High Point, North Carolina, possibly the original seller of the banjo.

I was fortunate to be able to record some sound samples of this tremendous old flathead Mastertone banjo at Banjothon 2009 in Maryville, Tennessee:

This banjo can be seen as well as heard in action on Fireball Mail in this YouTube video.