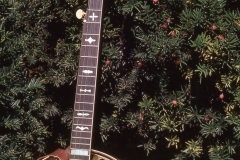 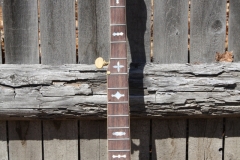 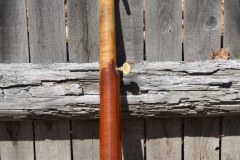 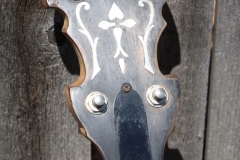 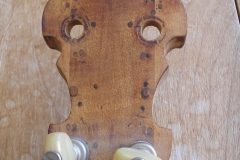 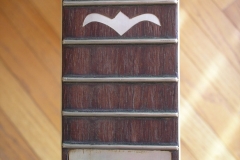 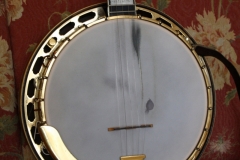 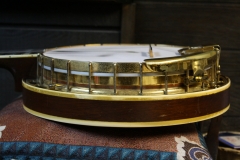 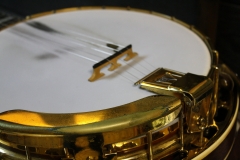 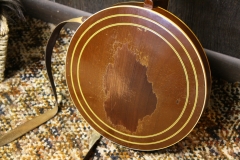 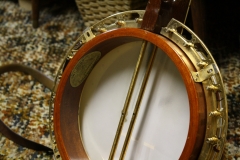 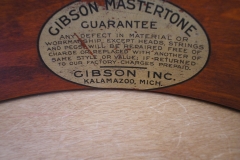 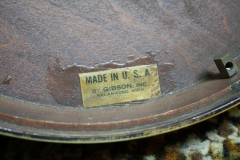 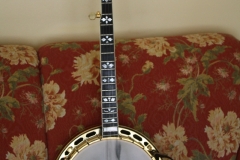 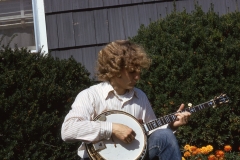 After Gibson’s top-tension banjo models were introduced in 1937, only one conventional Mastertone remained in production–style 3 was lowered in price from $100 to $75 and, in keeping with Gibson’s new vogue for naming instruments after their retail prices, it was renamed style 75.

RB-75 #E4370-4 (see Gibson banjo serial numbers vs. factory order numbers) was shipped on September 11, 1942 to the Kalamazoo, Michigan branch of the Grinnell Brothers music store.  The presence of a “Made in U.S.A.” label inside the resonator is unusual in that such labels were usually only applied to instruments being shipped out of the country.  Contrary to our present-day expectations for a professional-quality banjo, #E4370-4 was delivered in a #121 “Challenge” soft chipboard case which, not surprisingly, was no longer with the instrument when the current owner acquired it in the 1970s.

In keeping with many Gibson banjos leaving the factory after the United States’ entry into World War II, this example displays a number of nonstandard features reflecting wartime materials shortages.  This banjo’s neck is straight-grain maple rather than style 75‘s standard mahogany, and has no handstop.  The budget-model RB-00 five-string had a maple neck with no handstop, and it has been speculated that RB-00 neck blanks may have been used to build necks for some of these late RB-75s.  The narrow neck width necessitated the sideways placement of the first-fret inlay; the mother-of-pearl block inlaid at the twenty-first fret is blank rather than being engraved “Mastertone”, the factory apparently having run out of the engraved version.  Some examples of late RB-75s have even been seen with a piece of mahogany inlaid in place of the Mastertone block.

While the other known banjos from lot #E4370 have peghead overlays inlaid with a fleur-de-lis and a large, clunky Gibson logo, #E4370-4 features the leaves and bows inlay and more finely-cut logo typical of Aumann Brothers inlay work seen on style 3 Mastertones of the early 1930s.

The banjo’s pot largely reflects standard specifications for style 75 with a mahogany resonator featuring front and back binding of equal width.  The tone ring is an original high-profile flathead and the Mastertone decal is uncut.  The brackets are the thinner type manufactured by Kluson, frequently seen on wartime banjos; the slightly taller stretcher band with sharper corners is also typical of the period.  The banjo was gold-plated circa the 1960s and the current tailpiece is a replacement dating to that period.  The current flange is a replacement although the original flange remains intact and with the banjo.  The two tuners remaining on the original neck are later replacements; since 1975 the banjo has been equipped with a five-string conversion neck with an ebony fingerboard and hearts and flowers inlay.