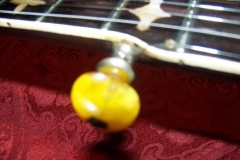 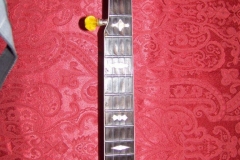 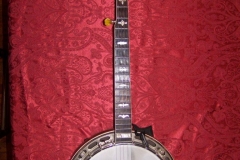 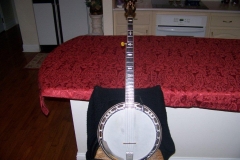 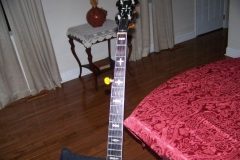 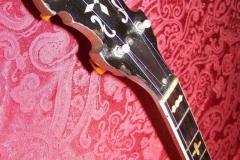 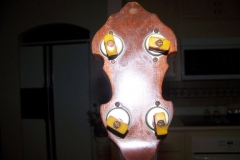 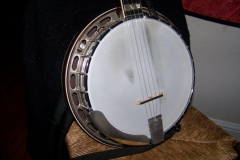 This RB-75 was shipped from the Gibson factory on March 22, 1940 to City Music Company and for many years was the working banjo of Manuel Dewey “Old Joe” Clark (August 6, 1922-February 20, 1998).  A native of East Tennessee, Clark was featured for over fifty years as a singer, dancer, and comedian on Kentucky’s Renfro Valley Barn Dance where later in his career he performed with his son Terry, also a banjo player.  In 1949 and 1950, Clark toured as a comedian with Bill Monroe and the Blue Grass Boys.  Renfro Valley’s annual bluegrass festival is named for Clark, who was memorialized in 2001 with a life-size bronze statue, complete with this banjo, in Renfro Valley.

While style 75 banjos displayed considerable variation in inlay patterns and even wood and plating types, #EA-5690 (see Gibson banjo serial numbers vs. factory order numbers) is typical of one of the style’s most commonly-seen configurations.  The wood is mahogany; the double-cut peghead is inlaid with the “diamonds and squares” pattern that had been used on style 3 banjos of the 1920s and the fingerboard is inlaid with a truncated version of the “leaves and bows” pattern used on style 3 banjos of the 1930s.  The flathead tone ring is standard for five-string and plectrum style 75 banjos.  The peghead tuners are the original Klusons with Catalin  buttons; the button on the friction fifth-string peg has been replaced.