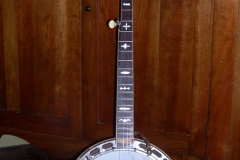 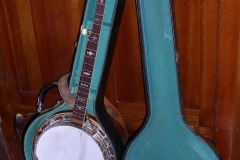 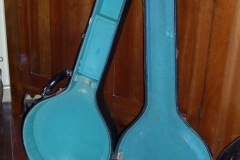 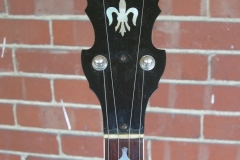 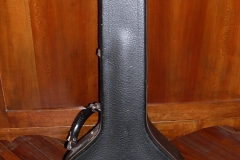 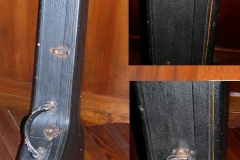 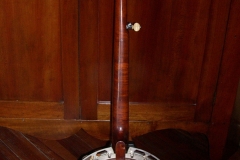 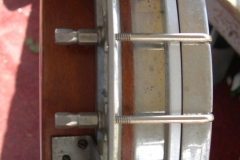 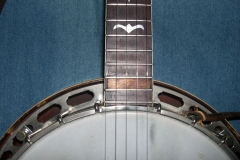 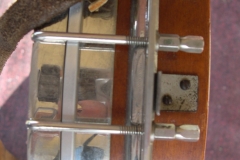 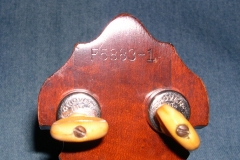 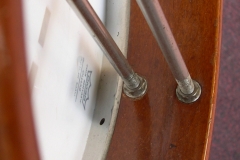 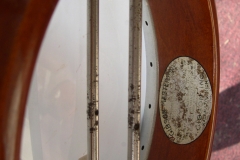 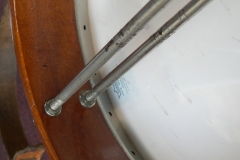 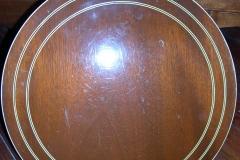 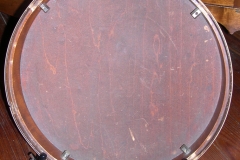 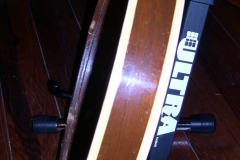 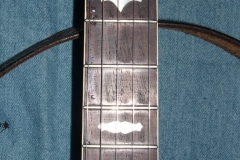 After the top tension models were introduced in 1937, only one conventional Mastertone remained in production–style 3‘s price was lowered from $100 to $75, and it was renamed style 75.  Owner Ken Landreth fills us in on this prime example of an RB-75:

“The F5883 lot of banjos were shipped from Gibson in 1942 (shipping dates from Gibson shipping ledgers are listed below). #F5883-1 was shipped to the Morris Loan Office in Columbus, Ohio on June 15, 1942.  The banjo was found in Ohio in 1974 by Maurice Mickey. It has a straight grain maple neck with no volute/thumb-stop.  These necks are thought to be originally made for RB-00 banjos and were used on style 75 banjos when no mahogany necks were available.  The neck on #F5883-1 has a factory patch near the fifth-string peg and this may support that theory since RB-00 necks were finished in a very dark color and the patch would normally not have been seen.  The peghead overlay for this batch of banjos is thought to have been originally made for lap steel guitars, which would account for the poor fit of the ‘Gibson’ logo.  This banjo has the serial number on the back of the peghead, but no number in the shell or resonator.  The Mastertone seal is not cut, but has lost a significant amount of the gold leaf found on seals during this period, presumably from cleaning.  The banjo had a hole cut for a Mastertone block at the twenty-first fret, but the inlay in that spot is a plain piece of mahogany.  It has been refretted, but all fingerboard inlays are original.  When found, the neck was in poor condition and was repaired and refinished by Harry Sparks, Jr. of Louisville, Kentucky.  The shell, resonator, and metal parts are in ‘as found’ condition with the following exceptions: as found, the banjo had Grover two-tab tuners and a simple Grover tailpiece.  The current tailpiece and tuners are period upgrades. The original case, key, wrench, and sheet of instructions for banjo maintenance remain with the banjo”.