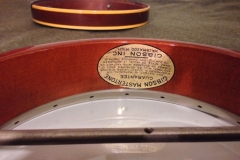 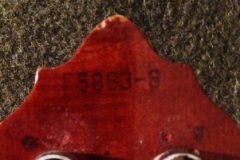 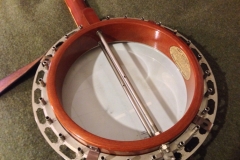 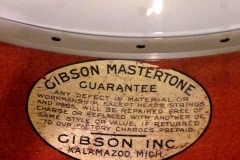 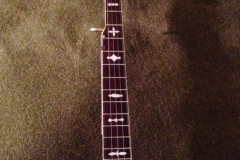 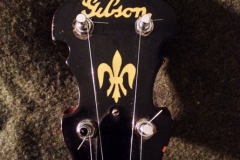 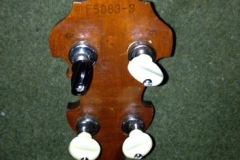 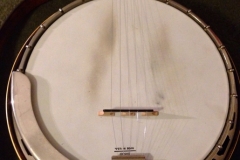 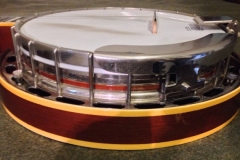 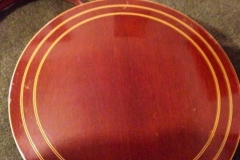 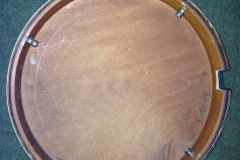 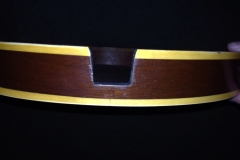 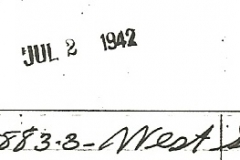 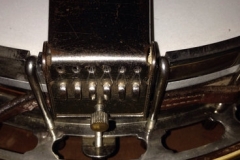 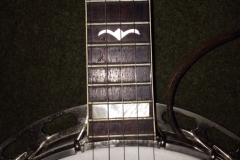 After the top-tension models were introduced in 1937, only one conventional Mastertone remained in production–style 3 was lowered in price from $100 to $75 and, in keeping with Gibson’s new vogue for naming instruments after their retail prices, it was renamed style 75.

RB-75 #F5883-3 (see Gibson banjo serial numbers vs. factory order numbers) was shipped on May 12, 1942 to the West-Sloan Music Company of Greensboro, North Carolina.  The banjo was sent back to the Gibson factory for an unidentified repair and returned to West-Sloan on July 2, 1942; a third shipment of the banjo (most likely another repair) was on December 21, 1942 to the Southern Music Studio in Burlington, North Carolina.

In keeping with many banjos leaving the factory after the United States’ entry into World War II, this example displays a number of nonstandard features reflecting wartime materials shortages.  This banjo’s neck is straight-grain maple rather than style 75‘s standard mahogany, and has no handstop.  The budget-model RB-00 five-string had a maple neck with no handstop, and it has been speculated that RB-00 neck blanks may have been used to build necks for some of these late RB-75s.  The narrow neck width necessitated the sideways placement of the first-fret inlay; the mother-of-pearl block inlaid at the twenty-first fret is blank rather than being engraved “Mastertone”, the factory apparently having run out of the engraved version.  Some examples of late RB-75s have even been seen with a piece of mahogany inlaid in place of the Mastertone block.

#F5883-3 remains in excellent condition including its original flathead tone ring, one-piece flange, and uncut Mastertone decal.  The tuners have been replaced; the simple tailpiece is frequently seen on wartime Gibson banjos and is likely original.  The banjo was owned for many years by a lady from Wilkes County, North Carolina who performed under the stage name “Cousin Melvinia” and who, according to family history, bought the banjo from Bill Monroe circa 1943 and kept it for the rest of her life.  An accomplished clawhammer-style player, Cousin Melvinia is said to have played in her youth with fellow North Carolinian Doc Watson and later in the 1960s at some North Carolina fiddlers’ conventions.