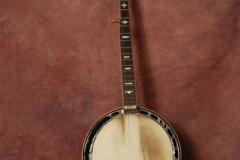 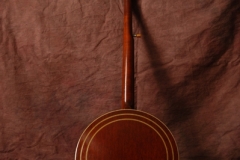 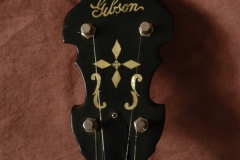 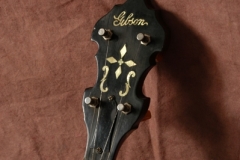 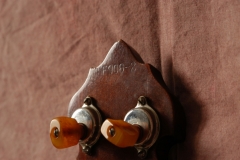 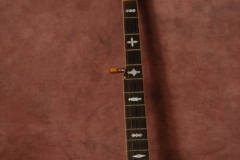 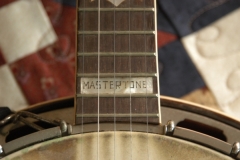 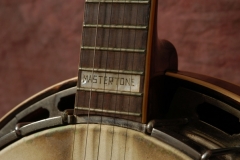 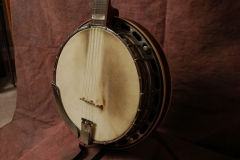 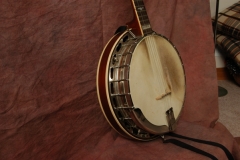 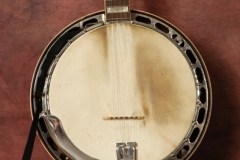 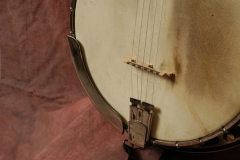 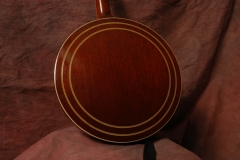 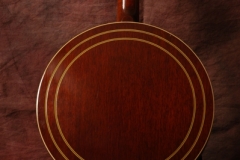 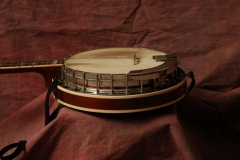 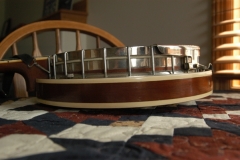 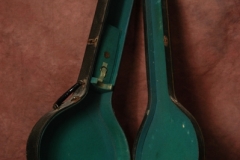 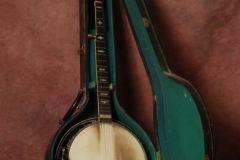 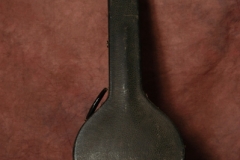 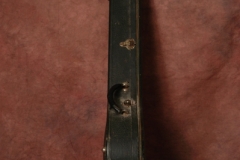 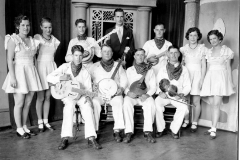 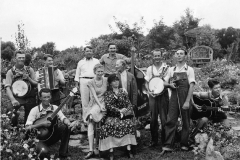 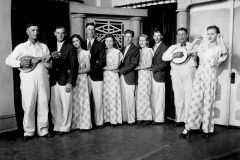 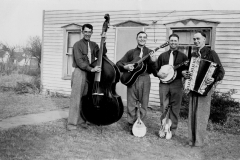 After the top-tension models were introduced in 1937, only one conventional Mastertone remained in production–style 3 underwent some slight changes, its price was lowered from $100 to $75, and it was rechristened style 75.

RB-75 #F906-2 (see Gibson banjo serial numbers vs. factory order numbers) was shipped from the Gibson factory on February 10, 1941.  It features a one-piece flange, a high-profile twenty-hole flathead tone ring, nickel-plated hardware (with the exception of chrome-plated hooks and nuts and a gold-plated tailpiece bracket), Presto tailpiece, and mahogany resonator veneer with two concentric rings of white/black/white purfling on the back.  The catalog specifications for style 75 included a matching mahogany neck, but this example features a straight-grain maple neck.  A number of different inlay patterns are seen on style 75 banjos; the rosewood fingerboard of this banjo is inlaid with a somewhat simplified version of the “leaves and bows” pattern that had been used on style 3 since the early 1930s; the double-cut peghead features the “diamonds and squares” inlay pattern used on style 3 banjos of the 1920s.   This inlay combination was adopted by Gibson for use on the RB-250 beginning in the early 1970s, although on that model the fingerboard was ebony and the peghead was fiddle-shaped.

The banjo is housed in its original red-line hardshell case.  The tuners are the original Klusons with Catalin  buttons and the original friction fifth-string peg is intact.

This banjo was owned and played for many years by Davis Brown, originally of Yadkinville, North Carolina.  Mr. Brown’s son Tom tells us, “. . . both my dad and granddad played in a band called ‘The Blue Ridge Mountaineers’.  They originated out of North Carolina but moved to the Iowa area years ago and continued to play here and all over the U.S.  It was my Dad’s great dream to some day play on the Grand Ole Opry stage.  He came as close as playing with one of the stars once but that’s as close as he got.  He later, in his 40’s, became a born-again believer and became a minister.”  In the fourth photograph above, Davis Brown is the second man from the right with the banjo and the fiddle.  The other vintage photos show Mr. Brown and his grandfather Tal (the man with the banjo in the first photo and who also owned RB-4 #11101A-13) with different band configurations, although unfortunately the RB-75 is not among the banjos pictured.  Tom Brown is shown with #F906-2 in the last photograph.

I was very excited to be contacted about this previously undocumented banjo by Tom Brown in June of 2007.  RB-75 #F906-2 is now owned by Charlie Cushman.