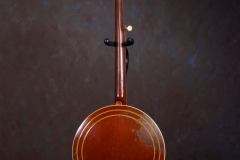 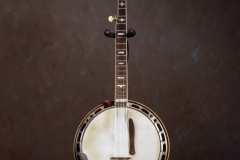 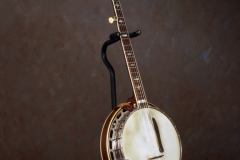 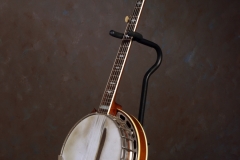 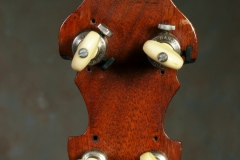 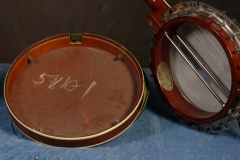 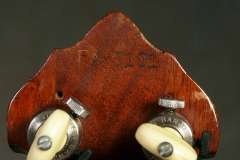 #FA-5101 (see Gibson banjo serial numbers vs. factory order numbers) was originally shipped from the Gibson factory on May 24, 1940 to the company store of the Stearns Coal and Lumber Company in Stearns, Kentucky.  The banjo remained unsold for years before finally being bought by a coal miner who later needed money and sold the banjo back to the store.  Store owner John Hall never resold the banjo and decided he would learn to play it; Hall owned the banjo until 1962 when he traded it to a banjo player from Greeneville, Tennessee for another banjo and cash.  The current owner acquired the banjo in December 1993.

While style 75 banjos displayed considerable variation in inlay patterns and even wood and plating types, #FA-5101 (see Gibson banjo serial numbers vs. factory order numbers) is typical of one of the style’s most commonly-seen configurations.  The wood is mahogany; the double-cut peghead is inlaid with the “diamonds and squares” pattern that had been used on style 3 banjos of the 1920s (see TB-3 Mastertone #9259-37, the “Bill Umeck”) and the fingerboard is inlaid with a truncated version of the “leaves and bows” pattern used on style 3 banjos of the 1930s (see TB-3 #42-18, the “Aloysius Schreibmaier”.  The flathead tone ring is standard for five-string and plectrum style 75 banjos.  The original Kluson tuners with Catalin  buttons have been replaced along with the hooks and nuts and fingerboard.