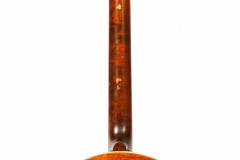 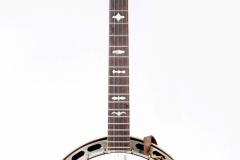 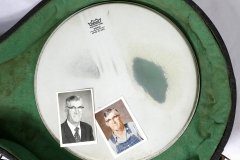 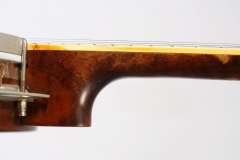 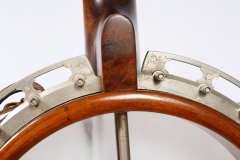 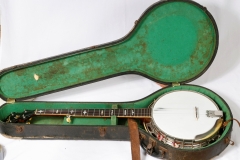 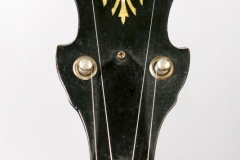 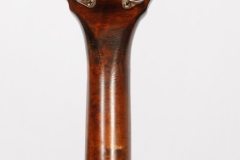 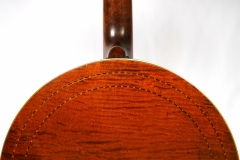 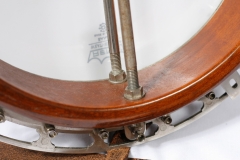 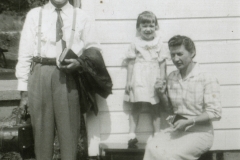 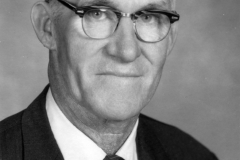 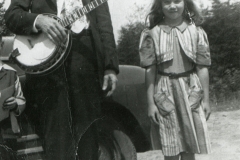 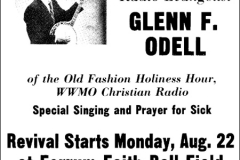 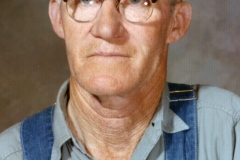 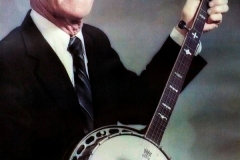 After the top-tension models were introduced in 1937, only one conventional Mastertone remained in production–the price of style 3 was lowered from $100 to $75, and this lowest-priced Mastertone model was renamed style 75.  In production sporadically through the World War II years, style 75 banjos are frequently seen with nonstandard specifications due to wartime material shortages; such banjos have been termed “floor-sweep” in the belief that Gibson employees would sometimes search the factory for any remaining parts to fill the few orders that came in, even if the resulting instruments were a mismatch of various models.

The RB-75 pictured here is a classic example of just such a “floor-sweep” instrument; the owner of this incredible-sounding banjo tells us more:

“It is highly likely that this banjo was sold through Griffin Jewelers, located on the ‘Cook Block’ in the Spray section of what is now Eden, North Carolina.  Charlie Poole historian Kinney Rorrer remembers ‘riding by Griffin Jewelers every day going back and forth to school on the bus, and seeing all those shiny Gibson banjos and guitars in the window.’  Griffin Jewelers was a Gibson dealer until it closed its doors in April 1967. This banjo’s original owner was  Lewis McDaniel (1907-1998) of Rockingham County, North Carolina.  McDaniel, better known as a guitar player, played in many bands in the region, most notably the Carolina Buddies, who made the first recording of  “The Story of the Lawson Family”.  He was also a bandmate of the great Charlie Poole, from the same region.

After a couple of years McDaniel sold the banjo to his brother-in-law Reverend Glenn Odell, a preacher from around nearby Ridgeway, Virginia.   Odell farmed and worked in the mills in the area, and also had a long-running gospel radio show on station WLOE in Rockingham County.  He played the banjo on his radio show and at local churches and tent revivals until his death in February 1984.  The RB-75 remained in its case under a bed until being acquired from Reverend Odell’s daughter in May 2009.

The neck is straight grain maple with no handstop, identical to the banjos of the F5883 lot.  The resonator appears to be a standard 1920s maple Granada resonator with purfling rings in the back, and white-black-white binding on the sides.  The stain color resembles typical RB-75s of the late 1930s and early 1940s.  It is very likely that the banjo was shipped with an Elton tailpiece, which was in the case.  The original friction fifth-string peg was also in the case along with a strap Reverend Odell used.”

Courtesy of an anonymous player.  Photos by Dean Hoffmeyer.